The Solaris buses are equipped with a special package for arctic environments which involves a range of additional equipment and thermal insulation specially designed for these conditions. 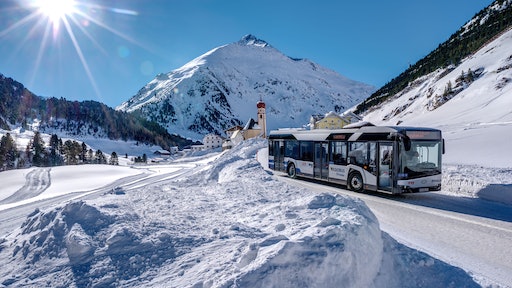 Solaris buses roam the streets in the coldest winter areas of Europe. They can be found in cities in the far north, where the northern lights illuminate the sky as they cut the tingling, moist air in Finland, as well as when they climb the roads in the alpine region of Tyrol. Wherever low temperatures make everyday life hard, and snow makes the view outside the window vague, Solaris vehicles bring travellers home and they cope without problems.

Barely 100 km from the Arctic Circle, under the shimmering green aurora borealis, the icy air is cut by Solaris buses. Luleå is the northern-most town where vehicles with this brand logo can be encountered. In this picturesque Swedish town days in December last slightly over 3 hours, whereas for nearly 6 months a year temperature does not climb above 0 C. And yet, this Arctic, extreme climate poses no barrier for Solaris vehicles fitted with the so-called Scandinavian package. This package involves a range of additional equipment and thermal insulation specially designed for these conditions, so the bus may face the winter and provide comfortable travel conditions to passengers and driver alike and, last but not least, use up less energy.

Even though there are only a few cities on the Solaris map such as Sweden’s Umeå and Skellefteå or the Norwegian Trondheim, which are that close to the Arctic Circle, in all of the dozens of conurbations on the Scandinavian Peninsula where Solaris is in use its vehicles are adapted to covering routes even in the coldest of weather. Each of the more than 1,000 Urbinos in the North features a double insulation of walls and roofs, as well as additional insulation of the chassis around the wheel arches. They also have double-glazed side windows. The floor in buses intended for Scandinavian countries undergoes additional preservation procedures, so as to prevent humidity from damaging the floor structure. Extreme road and weather conditions require also the installation of additional connections in the bus floor; these will enable the overnight charging of batteries. Often carriers in the far North decide in favor of floor heating, whereas heated mirrors and side windows next to the driver are standard equipment. Due to dusk falling quickly in the winter months, public transport operators often go for additional external lighting above the doors. In the case of heavy snowfall, the wheels of all Urbinos in Nordic countries are fitted with special clamps for snow chains thanks to which the bus will not lose grip on the road. Yet another potential protection against snow are brushes fixed above the wheel arches.

In Sweden, Norway or Finland temperatures can fall below -40, which can make igniting the vehicle engine quite troublesome. Engines mounted in Solaris buses may cope with temperatures going down all the way to -25 C, however, the engines used in CNG-fueled buses that are popular in Sweden, does not, as it takes a temperature of at least -12 C to start the vehicle. Swedes solve that problem by applying a water-based heating system in bus terminals. The front of the bus is connected to warm water exchanger which heats the fluid of the engine cooling system and thus the engine and the interior heating system of the vehicle as well. Thanks to this the driver and the passengers start the day in comfortable warmth. In Norway, it is more popular to install engine heaters to raise the temperature of the refrigerating fluid and oil in the vehicle. Of course, every bus also contains a standard heating system, although in Nordic countries it has a slightly increased heating power.

The severe, frosty climate is no hurdle for the battery Urbino electric, of which 15 ride along roads of Scandinavian countries. They feature similar solutions as those applied in combustion engine Solaris buses and are just as reliable. Electric buses in Tampere, Finland, cover mostly cobbled streets in the strict city center, whereas the proximity of the lake and the river makes the air always very humid. It is because of this humidity, which on frosty days makes life tough for residents of the city but which may also give trouble when charging the bus batteries, that pantographs of Urbino electric buses are heated. The appearance of ice on electrical joints could result in damage to the pantograph, which is why the mobile parts of the device and the electrical connections are all heated, as is the contact rail along which the contact head moves. In order to further limit the impact of winter cold on the operability of e-buses, the city has decided to also heat the floor underneath the pantograph station.

Another clever and customized solution regarding thermal management in a bus was applied in the Urbino 12 electric, shuttling around the Swedish port of Ystad. The vehicle is programmed to hold the temperature inside the Urbino constant, starting from when it hits the road in the early morning. During overnight charging of the battery, every day at 5.00 a.m. the parking heater or cooler of the bus will switch on automatically ensuring the vehicle interior reaches the desired temperature. Thanks to this there is no need to use valuable battery energy to heat or cool the bus if necessary and to prepare it for regular operation.

Solaris buses also fight difficult weather conditions at much higher altitude – on winding roads of Tyrolean mountain slopes or on the narrow streets of towns at the foot of snowy Alpine peaks. However, the most spectacular scenic route one may ride along in an Urbino is situated in the extremely picturesque region of the town of Sölden in the Alps. The bus line runs right up to the highest bus stop in Europe – at the foot of the glacier Rettenbach at an altitude of 2,675 m above sea level. May we remind those who remain unconvinced of the fact that the impressive mountain landscape of the Tyrolean Alps served as the backdrop for the acrobatic stunts of James Bond in the latest blockbuster with this character – the film Spectre. Alpine views can be admired through the windows of Solaris buses riding in the colors of various Tyrolean operators. In winter, the vehicles from Bolechowo often also double as ski buses, carrying ski admirers to the world’s most popular ski slopes around Schwaz or Kufstein. The snowy roads are heavily sprinkled with salt, which is why Austrian buses are coated with three layers of the best safeguard against the damaging influence of salt, whereas EBS valves in the chassis are additionally preserved. All wheels in the vehicle are adapted also to the use of snow chains. Nearly every Urbino model can be encountered in the Alps, even the InterUrbino. And they all fare excellently in such difficult climate and at such an altitude.