The company's goal is to expand its networked vehicle and autonomous driving capabilities, while creating common platforms between its brands. 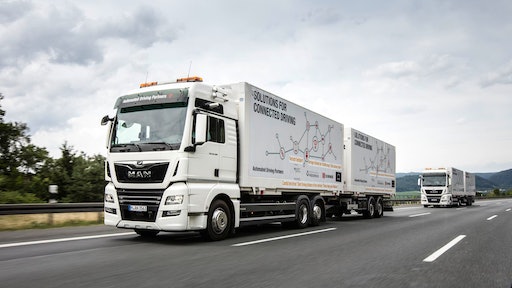 Truck platooning uses machine connectivity and automation, areas in which the TRATON Group will be focusing its R&D efforts.
MAN Truck & Bus

TRATON Group is ramping up its digitalization efforts and plans to spend over €1 billion in R&D by 2024. The company is looking to improve technology geared toward networked vehicles, logistics and autonomous driving.

It will develop common platforms for its three brands—MAN, Scania and Volkswagen Caminhões e Ônibus (VWCO)—to be more agile and reduce costs. "We want to move into the digital fast lane and are continuing to evolve from a hardware supplier to a provider of software and services," said Andreas Renschler, TRATON CEO and member of the Board of Management of Volkswagen AG, at TRATON's Innovation Day.

TRATON intends to leverage knowledge within the VW Group and its partners to create a common platform for autonomous driving.

During the Innovation Day event Scania unveiled its concept AXL autonomous truck which has no operator cab. Scania has already been testing autonomous vehicle technology in various applications for several years. Knowledge from these projects will be used to help create the common platform for the TRATON Group.

MAN is starting a large-scale test at a port in Harburg in a few month which will also benefit the group's common platform goal. The project includes both manual and autonomous vehicle operation. An operator will drive a truck to the port, with some parts of the drive highly automated. Once at the port the driver will get out of the vehicle and the truck will be driven autonomously.

More than a million networked trucks by 2025

According to consultancy company Deloitte, the telematics market alone will expand from €2.3 billion in 2016 to nearly €10 billion in 2026. Currently, trucks in Europe — depending on the estimate — only operate on average at around 50% to 60% capacity utilization. Intelligent digital solutions could help to considerably reduce the number of empty runs or vehicles that are underutilized — and thus also CO2 emissions. "Digitalization can significantly contribute to climate protection," says Renschler.

MAN CEO Joachim Drees announced the brand will introduce a new truck generation at the beginning of 2020. It will replace the current product line which was introduced in 2000.

The truck aims to set new standards in ease of operation and connectivity. MAN's new truck will meet current and future requirements for digitalization, automation and drive system concepts.

"This new truck generation has been developed based on concrete requirements of our customers in order to make their work and the work of the drivers easier, more efficient, and more comfortable. It is not just a new truck but rather an integrated transport solution. The vehicle will impress both transport companies and the drivers," said Drees.