MAN to Demonstrate Electromobility, Digitization and Autonomous Capabilities at IAA 2018

MAN will debut its MAN eTGE, a battery electric transporter, as well as its platooning concept and digitalization technologies for intelligent transport operations. 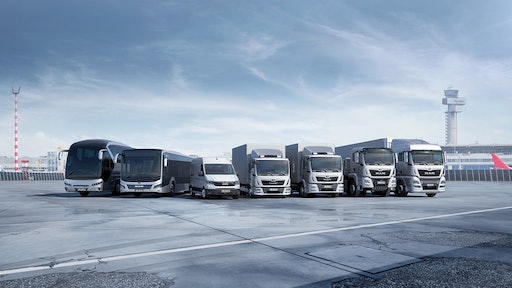 Commercial vehicle manufacturer MAN Truck & Bus gave at the pre-press conference in Berlin a sneak preview of the innovations it will be showcasing at IAA Commercial Vehicles 2018 in September. Alongside the latest product highlights for trucks and coaches, MAN’s advances in the fields of electromobility, digitization and autonomous vehicles will be the main focus of its exhibit at the industry trade fair, which takes place every 2 years in Hanover, Germany.

“The future of urban passenger and cargo transport is electric.”

Alongside an all-electric distribution truck – the MAN eTGM – MAN will also be exhibiting the MAN eTGE, a battery electric version of the new MAN transporter, at IAA. In doing so, MAN is one of the first manufacturers to present all-electric solutions for the entire scope of city logistics applications between 3 and 26 tonnes. For Joachim Drees, Chief Executive Officer of MAN Truck & Bus AG, this is the most important field of use for electric commercial vehicles: “The urban environment is where eTrucks can truly demonstrate their strengths. They have zero local emissions and therefore contribute to improving the city air. What’s more, they are extremely quiet, meaning that in future it may be possible to make deliveries to supermarkets at night, for example – solving the problem of daytime traffic. For us, one thing is clear: the future of urban passenger and cargo transport is electric.” When it comes to city buses too, things are certainly moving in the direction of electric power. For this reason, MAN has concluded development partnerships with Munich, Hamburg, Wolfsburg, Luxembourg and Paris with the aim of incorporating people’s everyday experiences into series development. A prototype of the MAN Lion’s City E will also be on show for the first time at this year’s IAA. The next step is to introduce a demo fleet of electric buses into everyday use in various European cities before series production of the battery electric version of the new MAN Lion’s City can finally get under way. This extensive trial will ensure that the vehicles can meet the high reliability standards required for use in local public transport.

Berlin Brandenburg Airport – the German capital's new and as yet unfinished airport and location of the IAA pre-press conference – has one thing in abundance: lots of free space. MAN therefore made use of the airport’s taxiway to demonstrate how truck platooning works. The concept involves an electronic drawbar which connects two or more trucks together. The first truck determines the speed and direction, while the one behind follows in an automated manner at a very short distance of around just 10-15 m. By using the slipstream, the convoy reduces the fuel it consumes by up to 10%. A driver sits in the following vehicle and can take action and override the system if required. “Platooning noticeably reduces CO2 emissions and significantly increases safety on the motorway. The electronic system of the following truck responds in just 5 milliseconds when the brake is applied in the front truck – faster than any human. The technology has the potential to significantly reduce the number of serious rear-end collisions on motorways,” explains Drees. As part of a pilot project, a MAN platoon has already been in operation on Germany’s A9 motorway between Munich and Nuremberg since the end of June. In collaboration with DB Schenker, the commercial vehicle manufacturer is testing how the technology acquits itself on the real road network. The field trials are being monitored by the Fraunhofer Institute, which is studying the effects on the drivers.

The automatic emergency brake assist used in trucks and buses as well as the camera monitor system which helps drivers when turning and aims to prevent serious accidents caused by blind spots also ensure increased safety. These systems were also demonstrated live.

In previous years, it was mainly the new bus and truck models that characterized the exhibits showcased by MAN Truck & Bus at IAA. Yet recently, digital innovations have increasingly come into the mix. “MAN is changing from a manufacturer of commercial vehicles to a provider of intelligent and sustainable transport solutions,” states Drees. It was for this reason that MAN founded the digital brand RIO in 2016 as a way of connecting the world of transport with the aid of an open, cloud-based platform and making it more economical and ecological. In order to underline this cross-manufacturer and open approach, RIO has been a separate, independent brand under the umbrella of Volkswagen Truck & Bus since 2017.

Building on this platform, MAN is already offering its customers initial digital solutions tailored to MAN vehicles under the name “MAN DigitalServices.” This means that in future MAN customers will be able to view vehicle data and the derived analyses in real time and wherever they are. As a result, customers will receive recommendations specifically tailored to them and their vehicles. At IAA 2018, MAN is presenting further services for optimizing vehicle analysis and maintenance management. With RIO as a strategic partner, MAN customers are able to benefit from digital vehicle services. And at the same time, the operators of mixed fleets receive a standardized basis of digital logistics services for the entire fleet – irrespective of the vehicle brand.