Daimler Trucks and Buses Emphasizes Commitment to Electrification at IAA 2018

Daimler Trucks & Buses announced at the show it will invest in the U.S. company Proterra Inc., and exhibited several electric vehicles. 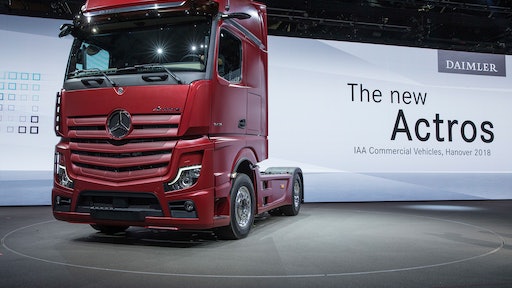 Daimler Trucks & Buses is investing in the U.S. company Proterra Inc. This was announced at the 67th IAA Commercial Vehicles in Hannover by Martin Daum, Member of the Board of Management of Daimler AG with responsibility for Daimler Trucks & Buses. Proterra was founded in 2004 with headquarters in California and is a leader in the business with electric buses for local transport.

In conjunction with the investment, Proterra and Daimler have entered into an agreement to explore the electrification of select Daimler heavy-duty vehicles. The first of these efforts will be to explore potential synergies with Daimler’s Thomas Built Buses division by bringing Proterra’s proven battery and drivetrain technologies to the North American school bus market, the next frontier for zero-emission, commercial fleets. Similar to public transit vehicles, school buses provide mission-critical community infrastructure and offer an excellent use case for vehicle electrification, as most school buses travel a predictable distance per day that is well within the capability of Proterra’s EV technology. With this collaboration on an electric vehicle for the school bus market, Daimler and Proterra have the potential to provide reliable, affordable transportation options with environmentally sustainable, zero-emission EV technology.

Daum said, “We started working on electric trucks and buses at a very early stage and we aim to set the standards here in each relevant segment. We expect the cooperation with Proterra to deliver additional impetus for the development of heavy-duty commercial vehicles with electric drive. In this way, we are broadening our scope in particular concerning the key technology of the battery – also with regard to North America.”

Not only since the newly concluded cooperative ventures, but for many years now: Daimler Trucks & Buses is pushing forward with electric mobility. An extensive range of electrically powered commercial vehicles will therefore be presented this year at the Hanover Exhibition Centre in Hall 14/15, which is traditionally the “Daimler Hall.” From the battery-electric eCitaro city bus to the all-electric heavy-duty eActros, which is already in customers’ hands, to the E-FUSO Vision One vehicle study, which is a preview of a fully electric heavy-duty truck from the E-FUSO brand.

The new, all-electric Mercedes-Benz eCitaro also had its trade-fair premiere at the IAA. The new city bus achieves unprecedented energy efficiency thanks to its innovative thermal management. With a battery capacity of 243 kWh and space for up to 88 passengers, the eCitaro is already the ideal vehicle for a considerable proportion of the operations undertaken by city buses today. In just a few years, it will be able to completely replace the combustion engine with unique battery technology and fuel cells as a range extender.

The new eCitaro is an integral part of the eMobility system at Daimler Buses. This eMobility system supports transport operators with everything from in-depth advice, an intelligent charging management system and the training of their employees through to the provision of specific services. The overall package is a compelling offer: Even before the vehicle goes into series production this autumn, orders have been received for several dozen eCitaro buses from customers in Germany and abroad, including Berliner Verkehrsbetriebe, Rhein-Neckar Verkehrsverbund, Hamburger Hochbahn and customers in Norway.

Already at IAA 2016, Mercedes-Benz Trucks was the world’s first manufacturer to present a heavy-duty electric truck. Now, the technology leader has taken the next step with the completely further developed Mercedes-Benz eActros, which had its world premiere in February this year. The first eActros was delivered in September to Hermes for use with the customer under real-life conditions. By the end of this year, the customer innovation fleet will comprise ten vehicles. Series production is planned to start in the year 2021.

Key features of the eActros include eleven battery packs inside and below the chassis, with a usable total capacity of 240 kWh. Drive comes from electric motors close to the wheel hubs with a maximum output of 2 x 126 kW. The additional weight of approximately 2.5 tons compared with conventional drive is partly offset by the increase in the permissible gross vehicle weight in the EU of one ton for trucks with alternative drive systems. The range of the eActros of around 200 km covers for example a typical day’s tour in the distribution of fresh food transport to supermarkets.

The all-electric light-duty FUSO eCanter is also in regular use – meanwhile with various customers in major cities in North America, Europe and Asia. The light-duty truck’s six batteries with a total capacity of 82.8 kWh allow a range of more than 100 km, which is more than many customers require for daily deliveries in urban areas. The electric motor has an output of 129 kW and the FUSO eCanter has a payload of up to 3.5 tons, depending on body and application. The FUSO eCanter is free of local emissions and nearly silent, and is produced in Tramagal, Portugal, for approximately 30 markets in Europe and the United States. The FUSO eCanter for the Japanese market is produced at the Mitsubishi FUSO plant in Kawasaki.

The E-FUSO Vision One also provides a glimpse of the future at the IAA. It is a realistic preview of an all-electric heavy-duty truck from the E-FUSO brand. The three-axle truck for distribution transport will achieve a range of up to 350 km thanks to a battery capacity of 300 kWh. The separate E-FUSO product brand for electric vehicles shows how seriously FUSO is taking the topic of electric drive.

Daimler Trucks is working hard on electric drive also in North America. In addition to the all-electric Saf-T-Liner C2 Electric Bus, also known as Jouley, which is to be seen at the IAA, Daimler Trucks presented two completely new all-electric trucks from its US subsidiary in early June: the heavy-duty eCascadia and the medium-duty eM2. The first customers, Penske Truck Leasing and NFI Industries, will test 30 of these electric Freightliner vehicles starting in late 2018.

In addition to electrification, another strategic focus of Daimler Trucks and Buses is on automated driving. The new Mercedes-Benz Actros heavy-duty truck raises to unprecedented levels aspects such as safety for all road users, efficiency for the operator and comfort for the driver.

The most important and spectacular new feature is the new Active Drive Assist, with which Mercedes-Benz Trucks puts partially automated driving into series production. The new Active Drive Assist can brake, accelerate and steer independently. Unlike systems that only operate at certain speeds, Active Drive Assist enables the driver to drive partially automatically in all speed ranges for the first time in a series-produced truck. New features include active lateral control and the combination of longitudinal and lateral control in all speed ranges through the fusion of radar and camera information. Active Drive Assist is based on the proven Proximity Control system with stop-and-go function in conjunction with Lane Keeping Assist from Mercedes-Benz. While the driver remains responsible for monitoring the traffic situation, the system significantly reduces his workload and makes an important contribution to increasing safety on the road.

The new Actros is also the first series-produced truck with MirrorCam instead of exterior mirrors. The mirror-cams are an enormous improvement for aerodynamics, safety and vehicle handling. They offer a greatly improved all-round view and consists of two cameras on the exterior of the vehicle and two 15-inch displays on the A-pillars inside the cab.

Another highlight of the new Actros is Active Brake Assist 5, the new generation of the emergency braking assistant. It supports the driver if there is the risk of an accident with a vehicle travelling ahead or a pedestrian on the road, if required with a full emergency braking. A new aspect is that Active Brake Assist 5 works with a combination of radar and camera system. This means that the system can better monitor the space in front of the vehicle and can react better to pedestrians.

Another significant element of the assistance systems of the new Actros is Sideguard-Assist, which had its world premiere two years ago. When turning right, this system helps the driver to avoid collisions with cyclists, pedestrians or stationary objects.