The FTR Trucking Conditions Index for May hit a reading of 5.74, indicating moderate recovery growth in the trucking industry. 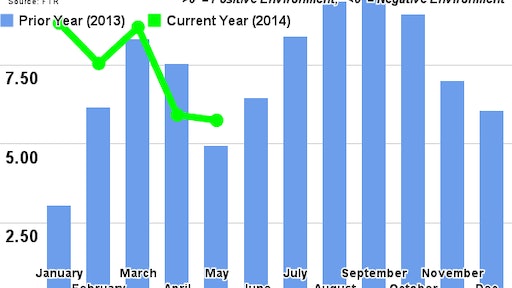 FTR’s Trucking Conditions Index (TCI) in May, at a reading of 5.74, reflects some headwinds affecting truck fleet results. Modest recovery growth along with the lack of acceleration in contract rate increases are accompanied now by increased labor and recruiting overhead costs. A near capacity crisis environment through May is expected to have eased somewhat in June. While still in solidly positive territory, the TCI outlook from FTR has moderated.

Details of the May TCI Index are found in the July issue of FTR’s Trucking Update, published June 30, 2014.

Jonathan Starks, FTR’s Director of Transportation Analysis, comments, “While still robustly positive, the TCI has moderated recently and reflects some of the challenges currently facing the industry. Capacity is tight but has moderated from the critical level that we operated in during and just after the winter months. Freight rates seem to be a tale of two cities with contract rates very stable and only showing modest growth, yet spot rate activity has been quite strong since winter hit and has not let off since then. If economic growth continues to remain modest then we would expect the status quo to persist for some time; however, if the economy finally shows a strong growth spurt in 2014 there isn’t sufficient surge capacity in the truck market to be able to easily accommodate that growth. When combined with the inability to quickly add more drivers into the industry we would then expect rate growth to accelerate in both the spot and contract markets.”