The FTR Shippers Conditions Index for January reached a positive reading of 2.6 due in part to lower fuel prices, but will most likely drop as the year progresses. 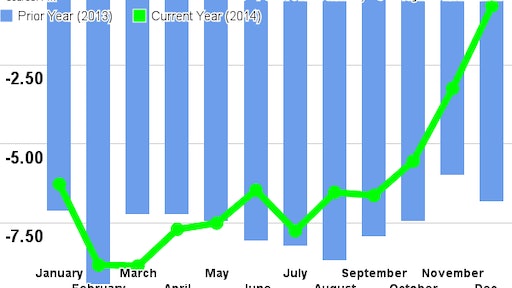 FTR’s Shippers Conditions Index (SCI) for January rose to a positive 2.6 reading, reflecting a one month reaction to fuel price reductions and adjustment for reversal of the 2013 Hours of Service changes. The SCI will fall back into neutral territory and deteriorate as the year progresses, impacted by building regulatory drag, continued freight growth and upward fuel pricing that could be substantial by mid-year.

Jonathan Starks, FTR’s Director of Transportation Analysis, comments, “It is tough for a shipper to get a solid view of the underlying costs for truck transportation due to three main factors. First, the dramatic drop in fuel price. This drop has led to an all-in cost (on a per mile basis) nearly equal to last year’s. After telling management for the last year to expect strong increases in transport costs, they now show a near-neutral impact on the bottom line. The second factor is truckload rates which, aside from the drop in fuel, are still increasing. Contract rates (excluding fuel) were up 5 to 7% versus last year to start 2015. The last factor is the skewed nature of the 2014 data due to the weather-induced capacity crunch of the Polar Vortex. This had the effect of raising rates and delaying shipments. The impact was much more visible in the spot market where rates rose 20% and capacity tightness was at levels never before seen. Data from Truckstop.com shows that their Market Demand Index (MDI) averaged 21.2 during 2014, a level that was 45% higher than 2013. We have not had those pressures this winter, and the MDI is back to levels seen during 2013. This is making year-over-year comparisons difficult to use as a reflection of where the market is moving.

“The SCI attempts to aggregate all of those impacts together to help you understand where the current market stands. With the first positive reading since 2010, it is clear that the market has removed several obstacles. Unfortunately for shippers, I expect that the market will quickly move back toward a negative environment as freight growth continues and regulations are enacted that make capacity tight again, moving base rates higher. There is also a strong potential for reversal of the recent reductions in fuel prices. All of these factors point toward a notable decline during the rest of 2015.”

The Shippers Conditions Index is a compilation of factors affecting the shippers transport environment. Any reading below zero indicates a less-than-ideal environment for shippers. Readings below 10 signal that conditions for shippers are approaching critical levels, based on available capacity and expected rates.