FTR’s Trucking Conditions Index at three-year low in May

The FTR Trucking Conditions Index for May dropped to a three-year low of 4.91 due to softer capacity, pricing and fuel prices. 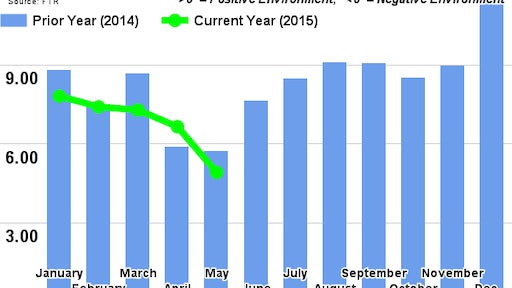 FTR’s Trucking Conditions Index (TCI) measure for May dropped another 25% to a three-year low of 4.91 due to softer capacity, pricing and fuel prices. Tight capacity from earlier in the year has eased following the partial suspension of the latest Hours of Service changes. FTR predicts the Trucking Conditions Index will soon move up into significantly more positive territory as the anticipated regulatory drag in 2016 and 2017 dramatically tightens capacity.

For the overall trucking environment, improvements in productivity and reductions in fuel prices have kept costs in check until now. However, with the recovery now fully maturing, fuel and other costs, like labor, should increase, putting more pressure on rates in early 2016.

Jonathan Starks, FTR’s Director of Transportation Analysis, comments, "While the market has notably softened, conditions for fleets are still quite positive and indicate how well they are able to manage the current headwinds. One significant benefit is that fuel costs have dropped substantially and have yet to significantly rise. A sharp rise in diesel would be very troubling for many of the marginal carriers. Another benefit has been the slow growing freight environment which has allowed fleets to re-engineer their lanes in order to take better advantage of drivers hours. While the capacity situation has definitely eased since last year, it is still well above historical levels and should keep contract rates, at minimum, stable with a potential to grow stronger by early 2016. Overall, the market is stable, and we see that path continuing until we get into 2016, when recession and regulatory risks begin to rise significantly.”