FTR says June 2015 trailer orders increased 76% from May and were 32% higher than the same period a year ago. 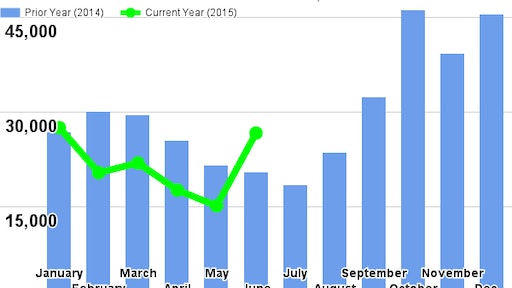 FTR reports June 2015 U.S. Trailer net orders were 26,700, a significant 76% increase from May and 32% better than a year ago. Several large dry van orders for delivery in 2016 boosted June orders with refrigerated van orders also exceeding expectations. The large order volume in June kept backlogs at a steady level in spite of trailer build increasing 1% per day over May production. U.S. trailer orders have now totaled 333,000 units over the past 12 months.

Dry van orders for June were the result of significant placements with a few OEMs and production was very strong during the month. Refrigerated van orders were also good, although not as strong as the dry segment. Contrary to most of the segments, Flatbed orders were particularly weak for the month.

Don Ake, FTR Vice President of Commercial Vehicles, comments, “There is a dichotomy in these numbers. Vans, both dry and reefer, had a great month. The fact that some fleets are so confident about next year that they placed orders three months early, is a great sign for the industry. However, there is concern in some of the other segments. Flatbed orders were unusually low; hopefully that is simply because all the orders are in for this year with fleets now waiting to begin ordering for 2016 during their typical purchasing season later in the year. Both liquid and dry tank markets have also started to slow down. This is primarily a result of softening in the energy industry.”