Rapid technological developments and the introduction of autonomous features are driving the market's growth says a new report from Global Market Insights. 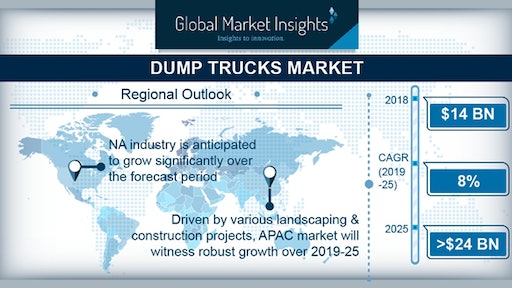 According to a new research report by Global Market Insights, Inc., the global Dump Trucks Market will exceed USD 24 billion by 2025.

The rapid technological developments and the introduction of autonomous features to newly-developed machines are driving the dump trucks market growth. Self-driving trucks are beneficial for mining and construction companies to eliminate human errors occurring due to tiredness and increased productivity at sites. For instance, in September 2016, Komatsu announced the launch of its new driverless and autonomous rigid truck, which eliminated the cab for weight reduction and improved efficiency. The industry is also witnessing a development of less-polluting machines with engines based on Tier 4 emission regulations that are adopted across the globe. These machines are gaining a high demand from application industries to reduce pollution and emissions levels and control carbon levels. As a result, manufacturers, including Hitachi Construction Machinery, Komatsu, Caterpillar, etc., are developing environmentally-friendly vehicles, which also deliver low-fuel consumption as compared to conventional models, expanding the dump truck market.

High costs associated with the initial machinery purchase is a major challenge for the dump trucks market. These machines are highly expensive as compared to conventional trucks due to advanced technologies and heavy lifting abilities. Companies and contractors that have low financial capabilities and machine requirement for a shorter time period prefer rental equipment due to the availability of advanced trucks at low costs.

The growing construction of new structures globally, such as skyscrapers, business complexes, and smart cities, to serve the increasing population needs is driving the dump trucks market growth. The major applications of these machines include transportation of loose materials, such as dirt, gravel, and sand, for construction operations, eliminating the need for several small trucks. The rapid expansion of the building and construction industry in Asian countries, such as India, China, South Korea, Singapore, etc., due to the robust manufacturing sector and high population is a major driver for the dump trucks market. The demand for high-quality and efficient construction equipment is growing in order to complete projects on time and eliminate the harmful effects caused by emissions. Additionally, the electric-based operational capabilities in new trucks is a major factor for the demand from contractors and construction companies.

The increasing recycling and waste management activities across all industry verticals in North America are adding up to the tipper trucks market growth. These machines are increasingly used in recycling projects to transfer waste materials from dumping grounds to factories. Moreover, the availability of trained and skilled drivers in the U.S. is also a major factor supporting the dump trucks market development. Due to high demand from both construction and mining applications in the U.S., manufacturers from other regions are entering the North America tipper trucks market. For instance, in May 2017, BELAZ announced its entry to the North American market by setting up an office in Ontario. The company intends to sell its trucks in the North and South American countries and compete with the existing players.