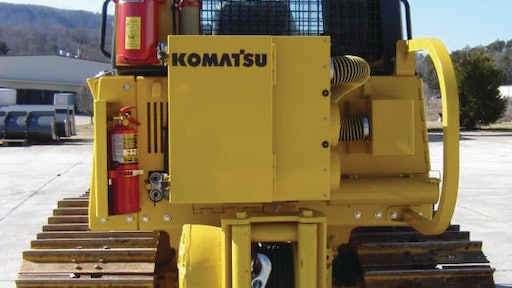 Air quality concerns have only recently come to the forefront of people's minds. Only years ago, smoking was allowed in places such as airports and hospitals. Within the past year or two, there has been an uprising of smoking bans in bars, restaurants and other public places as ordered by each individual governing body.

Just as individual government bodies are attacking the air pollutants people exhale, so too are government agencies, namely the Environmental Protection Agency (EPA) and Mine Safety and Health Administration (MSHA), working to improve the air people inhale. It is this work that will directly impact equipment operators and add on to engineers' job descriptions, which already include reducing engine emissions and noise.

The EPA is proposing the implementation of the Prevention of Significant Deterioration (PSD) program for fine particle pollution in areas that meet clean air standards. According to the EPA, "fine particle pollution can aggravate heart and lung diseases and has been associated with premature death and a variety of serious health problems including heart attacks, chronic bronchitis and asthma attacks."

The first regulation that will directly impact customers will be the May 2008 diesel particulate matter (DPM) exposure requirements as determined by the U.S. Department of Labor's Mine Safety and Health Administration (MSHA) in Title 30 in the Code of Federal Regulations 57.5060.

The proposal would change the DPM concentration limit permitted, change the enforcement strategies used in underground mines and simplify the requirements for a DPM control plan.

The proposed regulation reads: Effective May 20, 2008, a miner's personal exposure to diesel particulate matter (DPM) in an underground mine must not exceed an average eight-hour equivalent full shift airborne concentration of 160 micrograms of total carbon per cubic meter of air (160TCµg/ m3).

MSHA is able to determine whether a mine qualifies for a time extension to comply with the changing DPM limit based on economic and technological feasibility. Failure to meet the requirements could result in punishments that range from fines to, in some cases, closing down a mine. For equipment designers, this will mean installing enclosed cabs and HVAC systems on equipment that historically hasn't needed them.

However, the mining industry is but one area in need of air purification. People dealing with HAZMAT (hazardous materials) environments have requirements that are different than those working along the side of a road.

A filter can do more than filter out particulates, it can also filter out smoke, fumes and smells, so even an operator working in a landfill environment can breathe fresh, clean air.

In order to meet the pending regulatory demands of different government bodies set to ensure that the safety of workers is not compromised, companies like Sy-Klone International of Jacksonville, FL, and Enginaire Clean Air Systems of Janesville, WI, are working to protect the pulmonary wellbeing of cab operators in all environments.

Harold White, vice president of business and marketing development, Sy-Klone, agrees that until recently, the air a machine operator breathed in was an afterthought. HVAC function was secondary to machine productivity. He says it seems as though a cab is designed to meet all of its necessary capabilities and then, finally, cab environment control is considered. "Many of the HVAC systems seem to be simply cobbled together with whatever parts will fit in the space available in the cab."

Sy-Klone's interest is partnering with development groups at the OEMs to design air filtration solutions into their cab offerings. According to White, "Sy-Klone provides atmospheric-ejective air precleaners for cab HVAC systems to all of the major OEMs including Caterpillar, John Deere, Volvo, Komatsu, Kawasaki, as well as nearly 150 additional OEMs around the world."

"Sy-Klone uses an axial fan to pull air in and pass the air through the Gideon Precleaner in an axial flow pattern. The air is pushed onto the air filter after it's been precleaned so that we can load the filter with only the finest particles, most of which are 1.0 µm or smaller."

Bill Decker, president of Enginaire Clean Air Systems, is the brains behind the Cabaire filtration precleaner system. The prototype began approximately two years ago. Decker used preexisting filters to create his original Cabaire prototype. The system was officially introduced at World of Concrete in January of 2007.

Decker says, "a blower is designed to work against a resistance and will develop a raise in pressure while minimizing the airflow loss. This is beneficial in a cab pressurizer since it is always working through a filter and the resistance continually increases as the filter becomes plugged."

He continues, "by having a positive pressure on the incoming air chamber, the air conditioner can do its job easier with less power required. Even when the air conditioner is not being used, the clean air from the ECP is blown into the cab creating a positive pressure (with respect to the outside environment), which prevents dirt from entering the cab through leaks in its doors and other spaces." Dust literally migrates out of the positively pressurized space making the cab appear as though it has cleaned itself.

The filter in Cabaire's design uses a patented process which encapsulates the paper ends in a poured plastic to guarantee no leakage. Poured plastic is an alternative to gluing the paper ends together, which can cause the folds to stick together, thus reducing filtration efficiency. "By fixturing the paper when it is made, the pleat spacing remains constant so the entire filter is usable," explains Decker. "Most filters fold one pleat against another which closes off the media between them."

According to the regional manager of Dressta's central region at the time of the Enginaire units' installation, the dozers were in "severe conditions with fine coal dust being drawn into the cab through the filter and through doors and other air leaks.

"Since we installed Enginaire's cab pressurization unit, our filter changes went from every 20 to 30 hours, to after over 300 hours, having no reason to change in the foreseeable future. The surfaces inside the cab appear to have cleaned themselves, as the dust migrated out of the cab."

In another instance, two operators were in the wild fires burning in Georgia and Florida for two weeks, both using the Cabaire system. The two never changed their filters, while other operators were changing out their air filters every three days.

While Sy-Klone was developing Gideon Technology, it field tested a powered precleaner on a machine operating in a landfill. Then a prototype, the Gideon air precleaner was combined with a canister filter onto the HVAC system of a landfill compactor at a site in South Carolina.

In preparation for the test run, the existing HVAC fresh air panel filter was removed, replaced by the Gideon precleaner. The entire system was configured to appropriate specifications, and the unit was cleaned and sealed properly.

For six months, the test was monitored and the data were recorded. Cab cleanliness and odor intrusion were almost entirely eliminated, and the cab recirculation filters required no cleaning during that period.

The test revealed a filter replacement and maintenance labor cost savings of around $3,000.

When dealing with harsh environments, the last thing an operator is going to want to do is to change a filter every couple of days. The precleaner systems allow the operator to work in a safe environment with fresh, breathable air, and be assured that the work can get done in a timely manner without reservations about when a filter needs to be changed that week.

For the project manager, this means savings in labor costs, fewer filters to be purchased, less down time on the machines, and less worry that the operators are in unsafe and unhealthy conditions while working on the job site.

An imperative fact to remember is the importance of safety equipment and protective gear, such as masks. Randy Reinke, executive vice president of Custom Products of Litchfield Inc., Litchfield, MN, presses the importance of personal gear for all workers, regardless of the protection the cab filtration system may provide.

A cab cannot fully defend against the external elements outside of the cab. The cab filtration devices can protect the operator, but as soon as the operator opens the door, every bit of filtration has vanished.

Says Reinke, "The cab does not take the place of protective equipment. You have to always protect the person. The cab is just one layer of defense. Open a window or a door and you are subject to what is outside, thus, you need to be protected inside the cab as well."

The Z-Cab AiR, with its 1.8 m internal height and room for seven people, is Fritzmeier's biggest cab project to date.
Fritzmeier Group
January 4, 2021

Use of sensors and machine-based data will enable monitoring and control of cab air quality in real time to ensure safety of machine operators.
November 10, 2020

The LP5-V pushbutton is available with a choice of 73 standard legends, or customers can create their own logo, lettering or legend.
OTTO Engineering Inc.
November 10, 2020

The multifunctional armrest prototype enables the operator interface controls to change and adapt to fit the needs of various operating scenarios.
November 4, 2020

The PowerView 700 display features a glare-free, capacitive touchscreen which an be used even when machine operators are wearing gloves.
Enovation Controls
October 20, 2020

Sy-Klone collaborates with equipment manufactures to develop and integrate cab air quality systems which assure the health and safety of machine operators.
October 20, 2020
Follow Us