At bauma 2019, the company will exhibit its RadarEye now capable of being deployed without the use of the proprietary Orlaco SRD monitor with the SRD interface box.

Stoneridge-Orlaco complements its product portfolio with a radar proximity system that can be implemented on any existing analogue monitor in the market.

Avoid damage and collisions with RadarEye, the active vision system. RadarEye is an integrated active vision system, designed to detect and view objects in zones obscured from the operator’s view. RadarEye offers a solution allowing operators to work safely and efficiently. Stoneridge-Orlaco now offers the possibility to apply the RadarEye without the use of the proprietary Orlaco SRD monitor with the SRD interface box. The output of the SRD interface box is a video output of the camera image and the radar information as an overlay. Upon detection an audible signal output is sent to an external speaker. With the SRD Interface Box a standard camera system can be extended with the radar functionality without the need of changing the monitor. This means that RadarEye can now be integrated on any display in the market (Orlaco, non-Orlaco and HMI) with an analogue video input (PAL/NTSC). Both video and overlay can therefore be recorded.

When an object or person enters the danger zone, RadarEye displays the image with overlay on the monitor. The danger zone is fully configurable from 2-20 meters and is divided into a green, yellow and red danger zones. Everything that appears within the zones is brought into sight to prevent personal injury or material damage. The audible urgency increases as the person or object moves through to the red zone. Both stationary and moving objects are detected in a designated coverage area. The radar units have a ruggedized design and are shock- and waterproof. The system is not affected by environmental aspects such as snow, rain, mud and/or temperature changes (-40°C to +85°C) which can be expected at construction sites around the globe.

RadarEye is easy to implement on existing equipment and works as a stand-alone system on any type of machine. The system can be easily adjusted to personal settings. For initial configurations, an Orlaco serial monitor is required. An advantage of the system is that it only detects objects and people in the dangerous zone and not beyond the vehicle width to prevent unnecessary alarms.

RadarEye has been in the market since 2012, up till now only on Orlaco proprietary SRD monitors. It rugged design and has proved to be a popular active warning system for all mobile equipment. With thousands of machines relying on RadarEye around the globe, Stoneridge-Orlaco’s RadarEye has especially proven its worth on earthmoving, mining and container handling equipment. 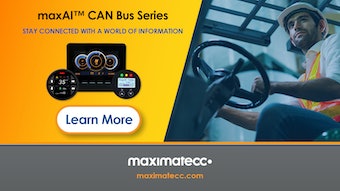 Easily monitor the status and health of your vehicle. Our versatile CAN Bus displays allow you to configure your parameters.
July 1, 2022

The digital generation of the ProViu 360 camera system increases driver comfort and safety in construction and mining vehicles.
Continental
March 20, 2019
Follow Us