A flameless HVAC for the long haul 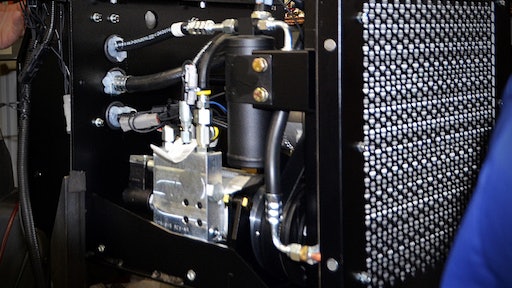 Hydraulic heating and cooling units for climate control in the operator’s cab are not new. Kenway Engineering has been designing and building them for heavy-duty off-road equipment for over 20 years. However, owner Ken Detloff did not believe the hydraulic HVAC units previously available in the market were living up to their full potential. He believed they could be more powerful and durable, capable of outliving the equipment in which they were installed. To achieve this, the company developed the Kenway 9067 Series model flameless HVAC unit (learn more, 12005793).

Development of the Kenway 9067 Series began with a part-by-part analysis organized by Detloff and Rey Carlson, Chief Engineer and Service Technician at Kenway Engineering. They examined which parts of the company’s existing units came back for repairs to determine common points of wear that could be eliminated.

“We had two goals in the beginning,” Carlson says. “One, we needed to make a much more reliable system. We wanted our units to outlive the rigs they go into. Most of the ones that go into cranes are first purchased as rental units. When they’ve got a few years on them, the rental houses sell the cranes to contractors, both domestically and internationally. Our goal: to see those units working shift after shift, day after day, owner after owner, throughout the full life of the rig.”

Kenway’s other goal from the start, Carlson says, was to boost performance. “Previous hydraulic systems were underachievers. We needed to create an overachiever, an HVAC unit that could heat a cab in the arctic even when the machine is at idle for extended periods.”

The resulting Kenway 9067 design has eliminated all major contributors to premature failure. “Warranties on hydraulic HVAC used to bite a manufacturer in the shorts. But this one, there just aren’t any repair calls for it. We have parts for it, but we haven’t had a need to send any out.”

The proof is in the field. “We have more than 400 units in equipment that see hard work on a daily basis. Some of those have been out for almost four years now, and they’re at the worksite doing their job, all over the world. Not a one has come back for replacement or any significant repair,” says Carlson.

Two things Carlson credits for the reliability are an outboard bearing assembly and high-tech, durable electronics.

“Other systems were susceptible to the side torque the motor bearing had to endure. Once we eliminated that side torque with an outboard bearing assembly, we eliminated problems with seals wearing out and bearing run-out. That took care of a lot of problems.”

A programmable logic controller (PLC) allowed Kenway to make several power improvements.  “We’ve eliminated shock loading. That means our unit’s parts are not exposed to all that stress. Naturally, that results in huge gains in service life,” says Carlson.

Electronic sensors tell the PLC that there is a surge in hydraulic power. This occurs frequently, for instance, each time a crane operator calls on an upstream hydraulic load, such as rotation. For a brief moment after the movement, the system is still under that pressure. Opening the HVAC at that point would kick the HVAC unit’s hydraulic circuit with a sudden jolt of 2,000 psi. The sensors tell the PLC that the load is there. Rather than exposing the HVAC to it, the PLC controls the flow through a proportional relief valve, protecting the unit’s components.

The Kenway 9067 Series “knows” when operators want 100% of the available hydraulic power for jacking or rotating operations. So the PLC shuts the unit down momentarily.

The PLC also makes it possible for the HVAC unit to heat or cool the cab when the vehicle is sitting idle. It will still get full functional capability from a flow of as little as 8 gph. By comparison, the engine of a rig with a traditional pressurized radiator would have to be running fast and hard to produce that much heat.

“Owners used to wonder why they were spending so much on fuel to heat their rigs,” Carlson says. “It’s because periodically the operator had to throttle up for a while to warm up again. You don’t have to do that with ours. Our unit has the same heating and cooling effectiveness at idle as under load.”

“Cost of ownership” is a popular phrase today among manufacturers. Since the cost of technology to meet stricter emissions regulations and boost machine performance has driven equipment costs higher, sometimes the only positive feature left to market is cost of ownership.

“We lowered cost of ownership,” Carlson points out, “and we did it without raising the price. Our units today go for pretty much the same as those we sold 15 years ago.”

The extra cost of technology has been offset by increased reliability and by Kenway’s control of its manufacturing processes. Almost everything for the unit is made in-house, from cables and harnesses to CNC-fabricated hydraulic manifolds to mounting brackets.

The unit also does not get in the way of normal servicing. “That’s another positive point about our Kenway 9067,” Carlson says. “It isn’t a blended unit. The HVAC is separate from the hydraulics. So a company’s regular HVAC person can service or troubleshoot heating and cooling without requiring separate training in hydraulics. And the same mechanic the company always calls on for its hydraulic work won’t find anything confusing about our HVAC. It doesn’t require specialized training or technicians to work around it.”

Joe Bradfield is senior writer for Ellenbecker Communications, an international communications firm specializing in the drilling, mining and construction industries.