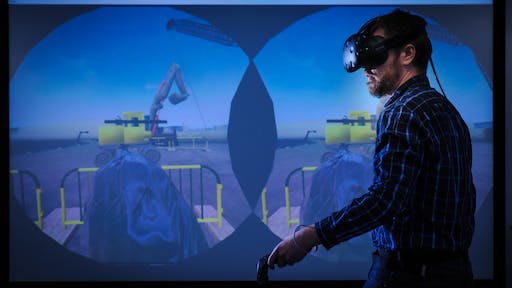 The Rhur-University Bochum (RUB) VR technology replicates the actual site where trainees will work; real-world elements such as sound and machinery are included to create as realistic an experience as possible.
RUB, Schirdewahn

As the costs of virtual reality (VR) hardware and software have decreased in recent years, the technology’s use within various industries has grown. The heavy equipment industry, for instance, sees the benefits it can provide, particularly to help provide training and improve safety on job sites.

VR—the computer-generated simulation of a real-world environment or situation—provides an artificial experience which makes the user feel as if he or she is actually in the simulated environment.

At CONEXPO-CON/AGG 2017, Liebherr featured a VR experience which allowed attendees to step inside its 710 HC-L luffing jib crane currently working on the MoMA Tower in New York City (booth G4637). Designed to offer a real-time perspective, the VR experience featured a game pad which could be used to explore the virtual, 3D world. Users could get up close to the crane’s man-size hook, fly into the jib, or take in views of the surrounding city. In addition, different weather conditions and times of day could be experienced.

Currently, much of the VR technology being developed for the construction industry is for training purposes. By training workers in a virtual world, they can acquire the skills necessary to do their jobs in a safe environment. Simulators which place users in the driver seat of a machine is one of the forms this training technology can take. (see image at right).

Ditch Witch is among the many OEMs who offers these simulators as a means of providing operator training on their machines. At CONEXPO, the company displayed its HDD virtual reality training simulator which is designed to simulate a real horizontal directional drill (HDD) work site (booth C31927).

According to Greg Wolfe, Ditch Witch Director of Training, the VR simulator builds upon the company’s existing HDD training simulator. “With this new system, operators will be fully immersed within a virtual reality HDD job site experience,” he says. The technology simulates a real job site where operators sit in a virtual drill cab and use joystick controls to operate the drill in real-life environments.

“The simulator is as close as you can get to the actual operation, other than training on a real machine on a physical jobsite,” says Wolfe. “Adapting the simulator into a virtual reality experience heightens the user’s sensory factors to a different level in a ‘non-dynamic’ environment.”

By training operators in a virtual environment, they and the surrounding equipment are not put at risk. Additionally, excess depreciation on the equipment is eliminated as it is not being used for both training and work tasks. Wolfe says the VR simulator also allows users to travel to another job site at any time by simply hitting a reset button, helping decrease the overall cost of training.

Wolfe says the backbone of the Ditch Witch simulator technology is algorithms the company created 15 years ago for its first HDD simulator. The company worked on the VR simulators together with METECS, an automation, simulation and software company which has developed simulation products for NASA’s training efforts.

The VR simulator provides training for the company’s entire suite of HDDs and in various environments—from urban to rural. Wolfe says users will be able to control a drill unit exactly as it would be on a real-world job site, with the same vision points replicated on the simulator. “We have placed underground utilities within the expected path of the drill, simulating the need to avoid real jobsite challenges,” he says. After each course, an overview is provided to give operators feedback on their performance which also includes steering and utility hits. “By addressing these mistakes in the simulator, the operator can learn from them and avoid similar mistakes as their training progresses.”

Safety was the driving force behind Ditch Witch’s creation of the VR training simulator, says Wolfe. Also underlying that benefit is the reduction in total cost of ownership for the equipment or job site owner. The number of mistakes made on the job can be decreased, and productivity increased, as there will be less of a learning curve once a new operator sits in an actual machine on the real job site.

Training on the simulators aims to connect classroom knowledge with operational experience, and provide an engaging format in which an operator can arrive on a job site with the confidence to handle a piece of equipment. “On-the-job training has been the primary method of training for decades, and we still incorporate this component after the operator has completed our recommended 40 hours of training,” says Wolfe. “You combine this learned skill with our online Ditch Witch Certified HDD Training courses and we believe we’ve provided a product that helps improve productivity and jobsite knowledge to that participant before he or she is ever on an actual jobsite.”

Researchers at Rhur-University Bochum (RUB) in Germany are currently investigating the possibility of interactive training courses using VR to increase safety on construction sites. Their goal is to have workers experience the various hazards they would encounter on a job site in order to sensitize them and ultimately prevent accidents from occurring.

Three-dimensional modeling using computer game technology enables the researchers to create the virtual world. To properly familiarize workers with the potential job hazards, the VR world is designed to be a replica of an actual site on which the trainees will work. Real-world elements such as sound, shadows and construction machinery are included within the virtual environment to provide as realistic an experience as possible.

Trainees wear fully-enclosed VR goggles to completely immerse them in the virtual world and use a handheld control device—similar to a remote control—to interact with objects.

The researchers see this technology being primarily beneficial to occupational health and safety planners as a supplement, if not a replacement, for printed training materials, presentations and films. Jochen Teizer, an internationally recognized safety expert for the construction industry who is aiding the research team, said in a press release about the project that the paper and video training materials are on par with watching television as they tend to have a lower rate of success at lasting learning. In the future, the researchers believe all construction workers could be trained using VR technology and have it customized to individual needs and work tasks.

VR technology has been aiding the design and development of new products for some manufacturers, as well. For instance, CNH Industrial’s New Holland Agriculture and Case IH brands both have VR rooms at their U.S. headquarters. The rooms contain a large screen on which CAD models of component, system and full vehicle designs are displayed. Engineers wear 3D glasses or a virtual reality helmet to literally step into their designs to examine them from various viewpoints.

Companies such as CNH Industrial use virtual reality as a way to evaluate product designs and collaborate with team members across the globe.Virtalis Inc.

Having this capability helps development teams get a better understanding of how their designs will work, and those aspects that might not. In addition, it can provide a means for teams in different parts of the world to more easily collaborate with one another. Each team can be located in its own VR room but be looking at the same CAD model at the same time, in the same manner and discuss in real-time the product being developed (see sidebar Virtual Reality for Design and Testing).

The gaming industry has helped to make VR technology more commonplace, which in turn has reduced its costs and enabled it to be more easily researched and applied to other industries. While the costs are still high, they will continue to go down as its use grows.

Much like younger generations’ familiarity with video game controllers has influenced the evolution of machine controls, VR’s increasing availability and use could also have an impact on the heavy equipment industry. Wolfe says the Ditch Witch VR training simulator was developed to take advantage of the tech-savvy generation of operators entering the industry. “HDD operators are in high demand, and this virtual reality simulator technology engages with that next generation of drill operators entering the market,” he says. “Contractors need to find available talent and utilizing virtual reality capabilities in training and other areas provides a direct link to emerging talent without the risks associated with more traditional training methods.

“Virtual reality will be an important component of Ditch Witch’s training program in the future, and we see opportunities to expand the technology into other product areas,” Wolfe continues. “Any technology that helps improve safety and productivity are constantly evaluated.”

As a demonstration of further ways Ditch Witch looks to utilize VR, it used the technology as a means of introducing its next generation drill, the JT40, at CONEXPO. Through the VR system, visitors to the company’s booth were able to experience the new drill in actual environments to get a better understanding of how it can actually be used.

“As these technological capabilities increase, we fully predict virtual reality will become a critical component for training in the industry along with other applications to introduce our industry to the next-generation workforce,” Wolfe concludes.

Virtual Reality for Design and Testing

Read the following articles to learn more about virtual reality’s use within the heavy equipment industry.

A case for broadening the use of virtual testing

Technology advancements for now and the next 120 years

Mack Trucks has started serial production of its first fully-electric truck, IVECO is partnering on an autonomous truck pilot, Meritor's 14Xe ePowertrain will be used on electric school buses and more news you may have missed.
Sara Jensen
December 22, 2021
Follow Us