Several elements came together to create the pull grader design we know today. 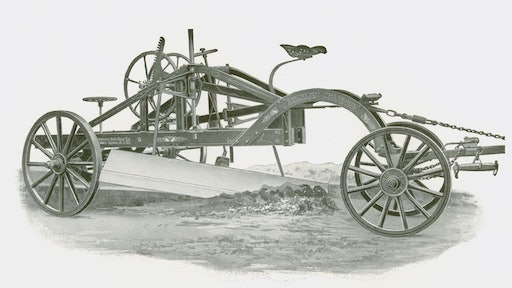 The first modern four-wheel grader, Samuel Pennock’s American Champion of 1877. It was also the first to have an adjustable rear axle. Its design was essentially unchanged until 1925.
Good Roads Machinery Company Bulletin K-B-R, Feb 1913

Drawbar. The drawbar conveyed the pulling power from the stock or tractor that moves the machine to the blade. Direct draft, the application of all tractive effort solely to the moldboard, was the ideal.

Frame. Pull graders used either an arched or straight frame, or a hybrid of both. The arched frame combined maximum strength and blade clearance with minimum weight, while the straight frame was most effective at conveying pulling power directly to the moldboard. A longer frame and wheelbase and lower machine height contributed to stability.

Moldboard. The first moldboards were merely flat boards, but concave blades that rolled the material out of the cut quickly became the standard. The abilities to side-shift the blade for ditching and shoulder work, and to swing it out and up to work a bank followed over the years. Standard pull grader moldboard lengths were usually 6-12 ft. (1.8-3.7 m).

Weight. Too heavy a grader exacted a harsh toll on the motive power, be it stock or mechanical, and could subject the grader to damaging stresses between the tractive effort exerted on it and the combined weights of the grader and load. Too light, and the operator could lose control as the blade was forced away from the load. The grader had to move as much material as efficiently as possible while staying with the load with minimal machine weight.

Rear axle. Wider rear axles made for greater stability in heavy going, and the rear axle could be extended on many models and steered on some.

Ease of operation. Pull graders used a wide range of devices to control the blade, such as levers, hand wheels, pedals and, in later years, hydraulics and small gas engines.

Tightness of construction and machining. Lost motion that introduced play into the moldboard was the bugaboo of grader design. Along with causing loss of control and producing a rough grade, this also caused stress and damage to the grader.

The Historical Construction Equipment Association (HCEA) is a 501(c)3 non-profit organization dedicated to preserving the history of the construction, dredging and surface mining equipment industries. With approximately 4,000 members in 25 countries, activities include publication of a quarterly educational magazine, Equipment Echoes; operation of National Construction Equipment Museum and archives in Bowling Green, OH; and hosting an annual working exhibition of restored construction equipment. The 2019 show will be September 13-15 at the Museum in Bowling Green. Individual memberships within the USA and Canada are $35 for 1 year, $65.95 for 2 years and $99.95 for 3 years, and $55.00 U.S. elsewhere. HCEA seeks to develop relationships in the equipment manufacturing industry, and offers a college scholarship for engineering and construction management students. Information is available at www.hcea.net, by calling 419-352-5616, or e-mailing info@hcea.net.

The companies will work together to apply ABB’s electrification, automation and digital solutions to Hitachi mining trucks and excavators.
ABB Group
March 31, 2021
Follow Us