Towed road planers, shapers and finishers were originally used to grade surfaces before the advent of pull and motor graders. 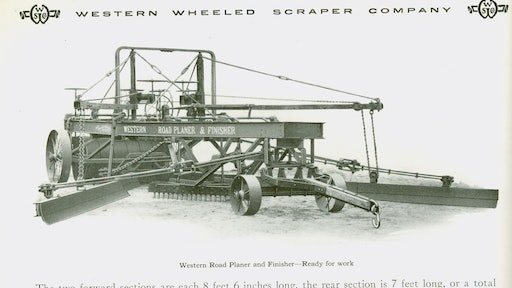 This rolling Swiss Army knife is the Western Wheeled Scraper Road Planer and Finisher. It combines a scarifier, wing blades to gather material to the crown, a trailing drag to finish the surface, and a drum roller.
Austin-Western Road Machinery Company catalog 40, n. d., HCEA Archives

Before the advent of any means of precisely controlling a grader’s blade, pull and motor graders were generally unable to put a crowned, finished surface on a dirt or gravel road. This work was done by towed road planers, shapers and finishers that lightly graded the surface with skids or blades that could be set to the desired profile. The blades were usually longer and not as tall as those on a grader, and came in several configurations.

The largest of these machines could work the entire width of a two-lane road in one pass, carrying material up from the shoulders and spreading it at the crown, and the blades could be swung into the width of the frame for transport. One machine, built by Russell Grader Company, used a single extra-wide blade whose end and center sections could be set to the desired profile, and in 1916 Western Wheeled Scraper marketed a planer that could be converted into a grader for large-scale patrol work.

Both the road planer nomenclature and the unwieldy multi-blade machines described above were apparently phased out in the 1920s, but smaller, one-lane road shapers were produced as late as the 1950s by the Gledhill Road Machinery Company. When it was introduced in the early 1930s, the Gledhill road shaper was notable for having one of the earliest true hydraulic control systems to be used on a piece of construction equipment. Towed behind a truck, it applied a vee-shaped framework of skids to the road surface, and the shaper’s operator set the skids to the road’s profile by means of a system of cranks and a hand-operated hydraulic pump.

The Historical Construction Equipment Association (HCEA) is a 501(c)3 non-profit organization dedicated to preserving the history of the construction, dredging and surface mining equipment industries. With over 3,800 members in 25 countries, HCEA activities include publication of a quarterly educational magazine, Equipment Echoes, from which this article is adapted; operation of National Construction Equipment Museum and archives in Bowling Green, OH; and hosting an annual working exhibition of restored construction equipment. The 2020 show will be August 28-30 in Concordia, KS. Individual memberships within the USA and Canada are $35 for one year, $65.95 for two years and $99.95 for three years, and $45.00 U.S. elsewhere. HCEA seeks to develop relationships in the equipment manufacturing industry, and offers a college scholarship for engineering and construction management students. Information is available at www.hcea.net, by calling 419-352-5616 or e-mailing info@hcea.net. Please reference Dept. OEM.