The Auto Patrol contained many of the features which are standard in today's motor grader designs. 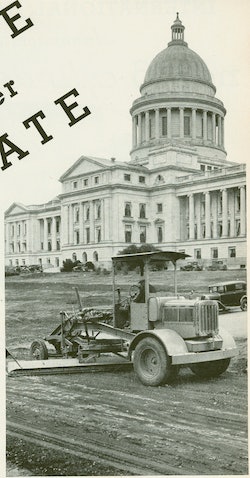 Being the world’s first integral motor grader, the Auto Patrol was marketed heavily to states for road maintenance. This image from a 1932 Caterpillar advertisement shows one at work behind the Arkansas State Capitol.
Roads & Streets magazine, January 1932, HCEA Archives

During the 1920s, many companies offered motor graders consisting of a grader frame mounted on a wheel or crawler tractor produced by another manufacturer. Caterpillar, which had purchased the Russell Grader Company in August 1928, was the first company to take the technology to its logical next level. In 1931, Caterpillar introduced the Auto Patrol, and it embodied several major design breakthroughs.

For all its innovations, the Auto Patrol was discontinued a year after introduction. Although motor grader designs have evolved considerably since 1931, the basic concepts of the Auto Patrol are the standard of today’s graders.

As machine control technology continues to evolve, real-time data and automation will transform the jobsite.
Curt Bennink
May 17, 2021
Latest

World of Concrete is the first major construction industry show to hold an in-person event in 2021.
Sara Jensen
June 10, 2021

The Honda eGX is a battery-powered motor which closely matches the performance of Honda GX engines used in the construction equipment industry.
Honda Engines
June 8, 2021

Cat Rolls out Next Gen 980 and 982 Medium Wheel Loaders

New technologies such as Autodig with Auto Set Tires and available CVT transmission allow these 10- to 12-ton wheel loaders be up to 10% more productive and increase fuel efficiency up to 35%.
Curt Bennink
May 24, 2021

Use of LEGO has enabled some manufacturers to quickly evaluate and develop new products as well as conceptualize future equipment design possibilities.
Sara Jensen
May 13, 2021
Follow Us