The Fresno-type scraper offered a combination of width and shallow depth front to back to easily load and move large capacities of material. 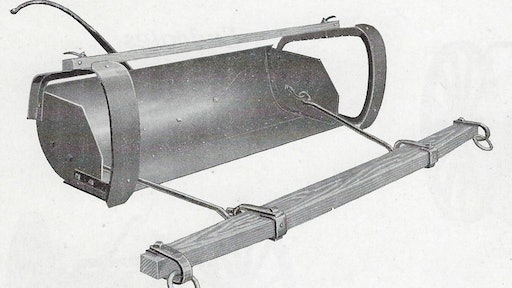 A conventional Fresno scraper. The earliest version had small wheels on the leading edge in place of the side runners.
Smith & Sons Manufacturing Company catalog, n. d., HCEA Archives

In 1951, railroad contractor James L. Allhands (1879-1978) published Tools of the Earthmover Yesterday and Today Preserved in Pictures, a book written with the intent of educating the general public about construction machinery. In the past two issues, we’ve seen how Allhands presented the evolution of drag (or slip) and wheeled scrapers. Here is his account of the next step in scraper evolution, the Fresno.

Tools of the Earthmover contains substantial discussion on the history of the Fresno scraper. Allhands traces the concept of a Fresno-type scraper to an article, “Cost of Excavating Earth by Means of Scrapers and Scoops,” by Edward Morris in 1841. No illustrations are provided, but Morris describes the machine as scooping up loosened earth and carrying it upon two runners that formed its sides. Morris states that it was effective on hauls of up to 100 ft. (30.5 m).

Forty years later, a wooden device akin to a heavy drag was being used to excavate the first irrigation ditch in Fresno County, CA. It came to be known as a buck scraper, and one Henry Hawn was credited by some with its invention.

Fresno blacksmith James Porteous patented a machine derived from the buck scraper in July 1882. The operator stood on the tailboard, and his weight provided the down pressure for excavating. It could either push dirt ahead, in the manner of a bulldozer blade, or be laid flat upon runners to carry its load.

The Fresno itself was developed by another Fresno blacksmith, Abijah McCall. McCall’s friend Frank Dusy was given a half interest in the scraper for funding the patent process for it, and patent 320055 was issued to both men for the design on January 16, 1885. Dusy sold his half interest to Porteous, netting a tidy 97% profit in the transaction. McCall himself passed in 1886, stopping royalties on its sale, and his son sold his father’s interest to Porteous as well. Porteous dubbed the machine the Fresno Scraper, and the Fresno and buck scraper names became interchangeable.

The original design was 8 ft. (2.4 m) wide, and the singletrees were attached to a single axle (later replaced by runners). Unlike the Porteous design, the operator walked and did not ride. Allhands notes that the original scraper was too large for a six-up team, and so later versions were narrower with 5 ft. (1.5 m) being the most practical. Its combination of width and shallow depth front to back gave it an outstanding combination of large capacity and ease of loading.

Allhands notes that Fresnos caught on slowly in the midwestern and eastern United States. He attributes this to three factors: The infancy of the advertising industry; demand on the west coast outstripping manufacturing capacity; and contractors preferring established earthmoving methods to new equipment. He states that it took more than 10 years for Fresno scrapers to really take hold outside the western United States. Be that as it may, Allhands calls it the “earth movingest mule-powered tool ever devised.”

Great strides have been made in electrification, digitization, fuel efficiency and more by the heavy equipment industry, and it will be exciting to see what the next 10 years bring.
Sara Jensen
March 5, 2021

The DOE and PERC have released new reports which analyze the energy use of alternatively powered transport vehicles.
Sara Jensen
February 19, 2021