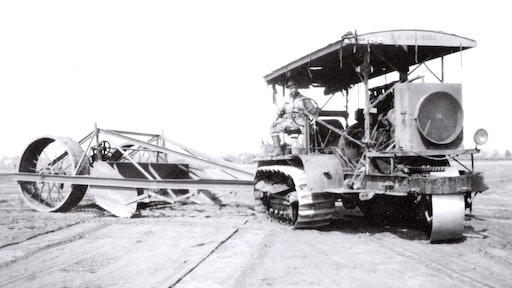 When R. G. LeTourneau changed careers from auto mechanics to land levelling, scrapers were available for use behind livestock or, as he preferred, tractors. But while they moved material well enough, they were inefficient in that they required their own operators apart from the teamster or tractor operator.

Stock-drawn scrapers were loaded and unloaded by laborers who manipulated the pan as the teamster handled the reins; but one team could handle only one scraper, leading to significant costs for both labor and for feeding and sheltering the teams when dozens of scrapers had to be massed for large projects.

Tractor-drawn scrapers carried more material and moved it faster, but still incurred high labor costs. They still had to be operated by a man at the scraper, but Baker Manufacturing Company’s Maney line and the early Euclid scrapers alleviated the costs somewhat by means of multiple operation. Up to five or six scrapers could be drawn by a tractor of sufficient power, and instead of a man for each scraper a team of two or three workers would handle the scrapers. A worker would load or unload a scraper, and when finished catch the next available machine as it went by. On later Baker Maneys, the scraper operator could even sit as he did his work and ride between the cut and fill.

Soon after going into the land-leveling business, LeTourneau began developing a remote-control system to operate the scraper from the tractor. It consisted of a generator on the tractor, powering electric motors on the scraper that controlled its functions. While it worked only for a single scraper, it eliminated the cost of the scraper man.

In mid-1921, LeTourneau had the opportunity to take on a substantial project. But there was a slight complication. He had made the modifications to a rented scraper, and had returned it to the owner – who had now rented it to a competitor, with his motors still on it. One of Mr. R. G.’s great strengths of character was refusal to be stymied, and it kicked in here. He and brother-in-law Ray Peterson sketched out ideas in the dirt driveway of LeTourneau's shop, and out of the drawings came the first of many LeTourneau-designed scrapers.

Built from odd pieces of iron found at the shop, the scraper had a full-width pan that was fairly shallow front to back, and it travelled on two large steel wheels at the back. Dubbed the Full-Drag scraper, it embodied two of LeTourneau’s design hallmarks – electric power, as with his rented scraper, and brazed welded construction instead of rivets for lighter weight.

Another of LeTourneau’s strengths was refusal to sit on his laurels. While the Full-Drag worked, he developed an improved design, the Gondola semi-drag, in 1922. It was rated at 8 tons capacity, and a system of belts, pulleys and gears transmitted power from the motors. Next time, we’ll look at his next major step in scraper evolution, the Mountain Mover.

The Historical Construction Equipment Association (HCEA) is a 501(c)3 non-profit organization dedicated to preserving the history of the construction, dredging and surface mining equipment industries. With over 3,800 members in over a dozen countries, activities include publication of a quarterly educational magazine, Equipment Echoes, from which this article is adapted; operation of National Construction Equipment Museum and archives in Bowling Green, OH; and hosting an annual working exhibition of restored construction equipment. The 2021 show will be August 27-29 in Concordia, KS. Annual individual memberships are $35.00 U.S. within the USA and Canada, and $55.00 U.S. elsewhere. HCEA seeks to develop relationships in the equipment manufacturing industry, and offers a college scholarship for engineering and construction management students. Information is available at www.hcea.net, calling 419-352-5616 or e-mailing info@hcea.net. Please reference Dept OEM.