R. G. LeTourneau's development of a scraper with two bowls, one moving back and forth within the other in a telescoping motion, increased earthmoving capacity. 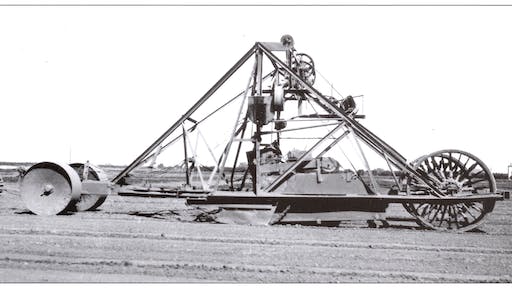 LeTourneau sold the Mountain Mover to an Eph Hahn in 1926. Here it is, sporting modifications made by the Hahns, including solid steel front wheels in place of the original spoked wheels and lowering the framework above the scoop to make it easier to transport.
Image from R. G. LeTourneau Heavy Equipment: The Mechanical Drive Era 1921-1953, by Eric C. Orlemann

As was noted in the previous issue, R. G. LeTourneau was not a man to rest on his laurels. Rather, one innovation led to another and another throughout his prolific career as an inventor.

The previous issue discussed his initial breakthroughs in the design of tractor-drawn scrapers. Shortly after developing the improved Gondola version in 1922, he set to work again to address additional limitations in his existing concepts.

The Gondola—for its efficiencies of a floor to carry much of the weight of the load and welded construction to reduce dead weight and increase capacity—had a problem in the basic design of its “scoop.” Its ability to pick up a load depended on the nature and movement of the material entering the scoop and the pulling power of the tractor. When empty, loading was fairly easy if the material allowed it to be. But as the scoop filled, loading became more difficult because the material tended to rotate clockwise with new material being forced up the front of the load. Loading stopped when the resistance of these dynamics in the scoop overcame the tractor’s tractive effort, resulting in a stall if the tractor operator did not stop loading soon enough.

Even in the early 1920s, LeTourneau’s principle that the basic limitation of earthmoving was never the size of the project but rather the equipment being too small was apparently at work. He wanted a scraper of substantially higher capacity, but recognized there was only one practical way to do it. A scraper that was longer would face the same problem of physics in the scoop; a wider scraper would be cumbersome and excessively heavy due to necessary bracing; and a more powerful tractor would needlessly add to the contractor’s cost of ownership and operation.

His solution was a scraper with two bowls, one moving back and forth within the other in a telescoping motion. The welded design he was already using made this possible, as riveting would have made for too much bulk. The telescoping motion allowed for the smaller, inner scoop to be loaded first, and then it was drawn back and the outer scoop was loaded with the payload in the inner scoop serving as a back wall. It unloaded in the same fashion, with the inner bowl being returned to loading position.

LeTourneau built this scraper, which he called the Mountain Mover, in the summer of 1922. Its total capacity was a massive, for the time, 12 cu. yd. (324 cu. ft.). He filed a patent application for it that September, and patent 1470853 was awarded the next October. Only one Mountain Mover was built, and it is now on display as an American Society of Mechanical Engineers Historical Mechanical Engineering Landmark on the campus of LeTourneau University in Longview, TX.

LeTourneau continued using the telescoping bowl concept for many of his subsequent scrapers, including some of his gigantic electric-drive machines of the 1960s.

The Historical Construction Equipment Association (HCEA) is a 501(c)3 non-profit organization dedicated to preserving the history of the construction, dredging and surface mining equipment industries. With over 3,800 members in over a dozen countries, activities include publication of a quarterly educational magazine, Equipment Echoes, from which this article is adapted; operation of National Construction Equipment Museum and archives in Bowling Green, OH; and hosting an annual working exhibition of restored construction equipment. The 2022 show will be September 16-18 in Bowling Green, OH. Annual individual memberships are $35.00 US within the USA and Canada, and $55.00 US elsewhere. HCEA seeks to develop relationships in the equipment manufacturing industry, and we offer a college scholarship for engineering and construction management students. Information is available at www.hcea.net, by calling 419-352-5616 or e-mailing info@hcea.net. Please reference Dept OEM.

Hyundai’s EPIC system has been adopted to make the most of the additional performance provided by the Cummins B4.5 diesel engine.
Hyundai Construction Equipment Co. Ltd.
April 6, 2022
Follow Us