Sustainability Takes the Stage in Montreal

Michelin's Movin'On Summit brought together technology and thought leaders from a variety of industries to discuss the current and future state of sustainable mobility. 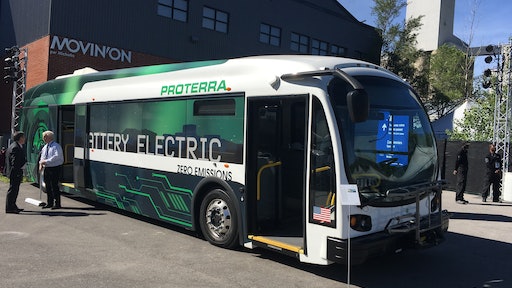 Proterra's battery electric bus was one of the many alternative energy vehicles included in the event's ride and drive.
S. Jensen

From June 13-15, Michelin Group's Movin'On summit provided insights into the latest sustainable mobility technologies and trends, as well as an outlook on the future of various transportation solutions.

The event came about as an evolution of the company’s Michelin Challenge Bibendum, an international conference focused on mobility and its challenges. Held triennially over the last 20 years, it centered around topics concerning vehicle connectivity, sustainable urban mobility, transport safety, and more.

Michelin CEO Jean-Dominique Senard and Mayor of Montreal Denis Coderre kicked off the summit, expressing their enthusiasm for so many people coming together from so many industries to discuss the future of sustainable mobility.Michelin

Michelin Chief Executive Officer Jean-Dominique Senard said during his opening remarks at Movin’On that the last Bibendum event, held in China, brought together participants not just from vehicle manufacturers but also telecommunication companies, banks, insurance organizations, and various other industries. “Everyone seems concerned” about sustainable mobility, he said, so the company rebooted the event to be more inclusive and encouraging of collaboration from all industries. “We strongly believe there is no opposition between growth and mobility,” he stated. “We invite everyone to bring together ideas and innovation, [it is] the only way we will succeed.”

Senard announced on the last day of the summit that it will take place once again in Montreal in 2018.

Denis Coderre, Mayor of the City of Montreal, professed his happiness at Michelin choosing Montreal as the site of the event, and bringing together so many stakeholders to work together to discuss the future of sustainable transport. “Every decision we’re taking now will have an impact in the next decade, so it’s important we share all the best practices,” he said. “There is no Plan B for the planet.”

“If you want to be part of the solution, I’m your ally; people like me and other mayors want to play a role,” Coderre added.

Movin’On consisted of workshops and labs that allowed attendees to work closely with one another to share ideas and collaborate on common industry challenges and technologies. Presentations from various industry thoughtleaders, heads of government and more were held during the summit, as well, to offer insight into the various ways connectivity and sustainable transport are taking shape.

A ride and drive area provided attendees the chance to travel in various types of alternative energy vehicles including a hydrogen fueled truck, a Proterra battery-electric bus and two of the latest Tesla models. There was also a solar-powered, pure electric boat available to take attendees on a short trip down the Lachine Canal, located next the summit venue. The boat is one of many electric-powered ones currently used to travel along the canal, and has been in operation for 15 years. According to the captain of the boat, the amount of electricity needed to push it is the power equivalent of two microwaves.

Intelligent transport systems being researched by Toyota and the use of the Internet of Things (IoT) to create mobility as a service (MAS) were among the various topics covered during the summit presentations, as well as developments of energy efficient and emissions-reducing traditional, and non-traditional, modes of transport.

One of the highlights for many attendees was the presentation given by Bertrand Piccard, explorer and President of Foundation Solar Impulse, who successfully flew a solar-powered plane around the world without the use of fuel.

The solar-powered plane made it around the world without the need for fuel.Solar Impulse

Roger Kearns, a member of the executive committee of Solvay—a chemical company which partnered with Solar Impulse to develop its solar-powered plane—noted during his introduction of Piccard that the solar plane project’s goal was to demonstrate the ability of clean technologies to replace non-renewable fuels and vehicles. He said Solvay is working to sell some of the technologies developed for the project, such as batteries, into other industries.

Kearns and Piccard both noted the project was also a demonstration of how it’s sometimes necessary to go outside one’s own industry for innovation to occur. Tesla, for instance, is a noted example of this as its founder was not someone from the automotive industry, but instead the tech world. Similarly, the Solar Impulse project was not developed by the aviation, but by various companies and individuals from outside of it such as ABB and Google.

Robert Lloyd of Hyperloop One, also provided an intriguing presentation for many as he discussed the company’s goal of bringing a new mode of transport to the industry. The basic idea of a hyperloop is to move people and goods using a pod-like vehicle through a reduced-pressure tube at high speeds. Lloyd says his company’s aim is to eliminate the barriers of time and space.

“There hasn’t been a new mode of transportation since the airplane,” he said, “and our current modes of transport are not getting better.” While he noted there is a lot of innovation on the horizon, the basic backbone of how we move long distances has remained stagnant. We are not keeping up with the movement of people to cities, highway congestion or the pollution being emitted by currently available methods of transportation. Because of this, companies like Hyperloop One are looking to change the way we think of about transportation, and do so in a way that benefits both society and the environment.

A rendering of a hyperloop transport vessel.Hyperloop One

Visit Hyperloop One’s website to learn more about the technology and trials currently taking place in various cities around the world, such as North Las Vegas in the U.S.

During the summit, Michelin unveiled its VISION concept tire. The tire is airless, eliminating downtime for reinflation, and composed of bio-sourced and completely recyclable materials. Terry K. Gettys, Executive Vice President of Research and Development at Michelin, said it has a light, efficient structure, and is designed to be rechargeable—the company will establish an infrastructure to enable the tread band to be rapidly reloaded as necessary.

He said during the unveiling that the tire is part of a system solution Michelin envisions as part of its long-term ambitions toward providing sustainable mobility solutions. The tire will be part of a connected vehicle system aimed at helping optimize the driving experience. “The long-term vision is to bring together all of the elements for sustainable mobility,” he said.

All aspects of the tire are a realistic dream of Michelin’s, he noted, because they are part of currently active research programs at the company, and it can therefore project delivery of the proposed solutions.

While it’s hard to capture all of the various topics and highlights of the first edition of Michelin’s Movin’On Summit in a single piece of content, one thing is certain—it provided a vast array of insight into the various ways people and companies are looking to advance mobility into the future, and provides this author with an even greater amount of optimism about the continued level of innovations that will likely be coming out of the various industries we cover for years to come.

What sort of sustainable mobility technologies/solutions are you most looking forward to in the coming years? Which ones do you think are the most—and conversely, least—likely to come to market? Let us know!