Ricardo assisted Toyota in design, testing and development, and constructed both the Alpha and Beta trucks at the Ricardo Detroit technical facility. 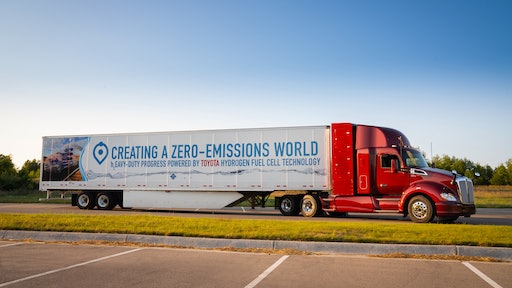 At the recent prestigious Center for Automotive Research (CAR) Management Briefing Seminars in Northern Michigan, Toyota announced the next great leap towards the future of zero-emission trucking by unveiling the second iteration of its Project Portal hydrogen fuel cell electric Class 8 truck. The new ‘Beta’ truck significantly exceeds the capabilities of the ‘Alpha’ demonstrator vehicle revealed in 2017, increasing the estimated range to more than 300 miles per fill. The truck also enhances versatility and maneuverability with the addition of a sleeper cab and a unique fuel cabinet combination that further increases cab space without increasing wheelbase.

For both the Beta and its predecessor Alpha vehicle, Ricardo assisted Toyota with a wide range of engineering functions. These included systems integration and packaging, including the fuel cells, power electronics, hydrogen tanks, cooling systems, batteries, electric motors and transmission. Many of the ancillary systems that are traditionally driven by the engine were also electrified, including the air compressor, power steering and HVAC system, the controls of which required integration into the vehicle’s J1939 CANbus. Crucially, both the Alpha and Beta vehicles were constructed by Ricardo at the workshops of its Detroit Technology Campus located at Bellville, MI.

With a gross combined weight capacity of 80,000 lbs., the 670-plus horsepower Alpha truck produced 1,325 lbs.-ft. of torque from two Mirai fuel cell stacks and 12 kWh of battery. The Project Portal Beta vehicle maintains these torque and horsepower numbers while also extending the range of the vehicle by 50% to in excess of 300 miles between hydrogen refills.

“The Ricardo team is pleased to have been able to continue our successful collaboration with Toyota on the very important Project Portal heavy duty zero emission fuel cell electric truck demonstration project,” comments Chris Brockbank, VP of Vehicle Engineering at Ricardo. “The Beta Project Portal vehicle is an impressive advance over its Alpha predecessor, offering practical design improvements in addition to its very practical 300+ mile range which makes it a capable ZEV option for drayage operations. We look forward to working with Toyota in the completion of the real world drayage testing, and to seeing the results of the project which, I believe, may well inform the future vision of heavy duty transportation.”