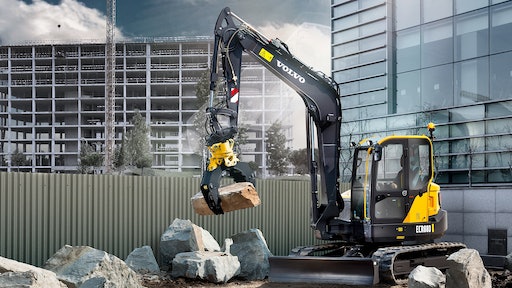 The ECR88D mini-digger is fitted with a Diesel Particulate Filter as standard, making it ideal for use in Low Emission Zones.

This July, the automotive industry was rocked by a far-reaching announcement when Volvo Cars stated that all its new cars would be electric or hybrid from 2019 onwards. The following day, the French government announced it would end sales of petrol and diesel vehicles by 2040 as a way to fight against air pollution. A few weeks later, the British government followed with a similar proposal.

But what will these bans mean for the construction industry and off-road vehicles? Construction equipment is largely run on diesel engines and so far, no official announcements have been made concerning their use once these bans come into effect. While decisions are yet to be made on what a diesel-free future means for construction equipment, Low Emission Zones (LEZs) currently provide an insight into how urban construction projects can have a less harmful effect on air quality right now.

THE WHEELS OF CHANGE

Air pollution is a contributing factor for hundreds of thousands of premature deaths in Europe each year and diesel emissions have been classified as carcinogenic by the World Health Organization. Therefore, reducing emissions from diesel engines is an important factor for improving health. In areas where air pollution levels are considered dangerously high, Low Emission Zones seek to improve the air quality and make it safer to breathe, by regulating the most polluting vehicles. These LEZs are almost exclusively found in city centers.

The European Union sets emission standards that define the acceptable amount of pollution that can be emitted by the exhaust of a vehicle sold in the EU and EEA member states. Depending on the area, vehicles with higher emissions either cannot enter the area at all, or have to pay a fee if they do.

To avoid the expense – real or perceived – of having to pay fees to bring construction machines into restricted areas, construction equipment firms are increasingly being asked by customers to fit a diesel particulate filter (DPF) to machines, to reduce the diesel particulate matter (black soot) from the exhaust gas of a diesel engine. “In recent years, there has been a definite upswing in requests for DPFs to be fitted to machines that are working in urban development and don’t have them as standard,” says Kurt Deleu, Director of Regional Sales Support (Europe) at Volvo CE. “But it’s important to mention, this is not always a clear legal requirement [of working in the LEZ].”

If it’s not a legal requirement, why the requests? It seems Volvo CE customers are simply preparing for the future. “DPFs are currently seen as an extra precaution in response to a perceived need to meet regulations in Low Emission Zones,” Deleu adds. “But as regulations around Low Emission Zones continue to become stricter, it’s likely this trend will continue.”

The tricky thing about Low Emission Zone requirements is that they are not harmonized across the EU – and instead are governed by different local and/or country level regulations. For now, construction equipment manufacturers like Volvo CE are dealing with requests for DPFs on machinery on a case-by-case, and country-by-country basis.

“All Volvo CE machines comply with EU emissions regulations, but at present DPFs are only fitted as standard to the EW60E compact wheeled excavator and ECR88D mini-digger and as an option for the ECR58D in the smaller machine category,” confirms Deleu. Meeting the needs of customers remains the highest concern for Volvo CE, which is currently investigating factory solutions for all of its smaller machines.

Volvo recently demonstrated the EX2 prototype – a fully electric compact excavator that delivers zero emissions, 10 times higher efficiency and 10 times lower noise levels – at the Volvo Group Innovation Summit in London earlier this year. It is believed to be the world’s first fully electric compact excavator prototype. While the concept machine is purely a research project at this stage, Volvo CE continues to develop technologies connected to electromobility, intelligent machines and total site solutions that benefit customers and the environment.

“Considering the seriousness of air pollution, and the moves governments are making to highlight it, this is an area we believe will continue to be high on the agenda and one we are committed to finding solutions for,” Deleu concludes.

When converted to propane, the Vanguard 400 engine with a catalyst muffler provides a significant reduction in carbon emissions.
Briggs & Stratton Commercial Power
October 20, 2021
Follow Us