The CNH Industrial brands are partners in an initiative to create the first real example of a methane-based circular economy, centered at a single site in France. 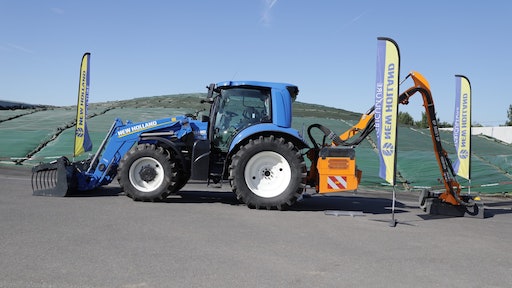 The circular economy is no longer just an idea; it is increasingly becoming a reality. In Cestas, in the French region of Nouvelle-Aquitaine, Pot au Pin Energie (a local energy company), Air Liquide (a leading gas production and distribution company), and Carrefour (one of the world’s largest supermarket chains) have brought together in one location, for the first time in France, all of the elements required to create a methane value chain.

This virtuous cycle begins in the fields of Planète Végétale, a farm holding managed by Pot au Pin Energie, dedicated to growing fruit and vegetables, especially pears and carrots. The same location houses the “digester”, a system that can transform 20,000 tons of biomass a year into biomethane (derived from farm waste and scraps, as well as from intermediate energy crops), thus returning the “digestate”—the solid residue from the process and an excellent fertilizer—to the farms. The biomethane is then purified and introduced to the GRDF grid (Gaz Réseau Distribution France, a leading company in the distribution of methane in France and Europe), the same grid that, as of June 22, the day of its inauguration, will supply the brand-new service station managed by Air Liquide. This service station will be able to refuel, every day, up to 100 industrial vehicles, including heavy and light vehicles, buses and work vehicles.

This is where IVECO comes in. A brand of CNH Industrial, IVECO has been working with Carrefour since 2012 to promote and develop clean logistics, focusing on natural gas. This is a partnership based on the undisputed leadership of IVECO in this field, a company with the most comprehensive range of methane vehicles on the market: from light commercial vehicles, such as the Daily Blue Power Hi-Matic Natural Power; to freight vehicles, with the Eurocargo NP and Stralis NP ranges; to vehicles for urban mobility, with the Daily Minibus NP and IVECO BUS Urbanway, Crealis and Crossway LE.

IVECO vehicles will play a key role in the Cestas virtuous system, transporting produce every day, including that from Planète Végétale, to the Carrefour chain of supermarkets; and refueling with biomethane at the local Air Liquide station, thus closing the methane value chain in an exemplary manner. CO2 emissions for transportation will be cut to nearly zero, a result that today is achievable thanks to biomethane. Additionally, at the inauguration of the new Air Liquide service station, IVECO BUS provided natural gas shuttlebuses for the participants.

Alongside IVECO and IVECO BUS, were two other CNH Industrial brands. First, New Holland Agriculture, who exhibited their own methane tractor prototype at the inauguration, the T6.180 Methane Power. This tractor can reduce CO2 by 10% and other emissions by 80%. The reduction in carbon dioxide reaches 95% when using biomethane, perfect for creating the virtuous cycle for an energy-independent company, such as Planète Végétale.

Lastly, FPT Industrial, the brand that provides one of the key components of all the natural gas vehicles in the Group, also attended the ceremony. Its engines can be found inside IVECO commercial vehicles, IVECO BUS buses, and the New Holland T6.180 Methane Power tractor; specifically, the Cursor 13 NG (the most powerful 100% Natural Gas engine on the market) is used by the IVECO Stralis; the Cursor NG range by IVECO BUS; while the New Holland tractor uses the 6-cylinder NEF NG. With over 20 years of experience and over 35,000 natural gas engines sold, FPT Industrial is a pioneer and a leader in this form of alternative power supply. In Cestas, its engines will be tasked with ensuring the reduced emission levels that only methane—and biomethane in particular—can offer.

A Vision of Sustainable Farming

Propane and electric vehicle drivetrains are different in design, but offer their own set of benefits when used in the appropriate duty cycles.
Adam Wilkum
February 2, 2022
Follow Us