A Vision of Sustainable Farming 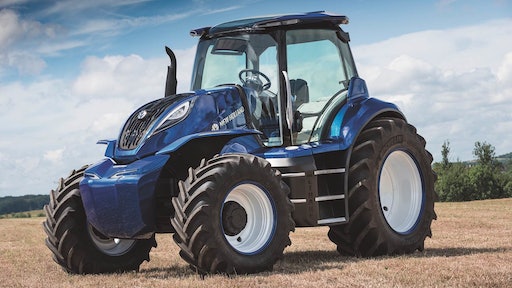 At this year’s Farm Progress Show, New Holland Agriculture introduced the next generation of its methane powered concept tractor. The tractor builds upon the company’s initial T6 Methane Power prototypes—first introduced in 2013—by enabling operation on methane or compressed natural gas (CNG). Doing so ensures customers around the world has the potential to utilize an alternative fuel tractor that best fits their needs and fuel availability.

In real-world field conditions, the methane powered tractor has shown the ability to produce at least 10% less carbon dioxide (CO2), and reduce overall emissions by 80% compared to standard diesel tractors on the market today. “It’s even more sustainable if you run it on biomethane produced from crop residues, waste or farm-grown energy crops…result[ing] in a virtually zero CO2 emissions profile,” said New Holland Agriculture's Sean Lennon during the unveiling of the machine at the Farm Progress Show.

Development of the tractor is part of the company’s clean energy strategy established in 2006; the goal is to investigate the feasibility of potential alternative fuel to provide customers with various sustainable solutions (see sidebar below to learn more).

One of the key updates made to the new methane concept tractor was ensuring diesel-like performance of the engine. It now has the same power and torque, as well as durability and service intervals as a standard diesel equivalent, but with up to a 30% running cost savings, explained Lennon.

With its 180 hp (134.2 kW) peak power output and 740 Nm (545.8 ft.-lbs.) maximum torque, the FPT engine enables the tractor to do everything a standard diesel tractor can—from yard work and transport to high-speed field work and grain loading. “It has all the versatility and productivity you’ve come to expect from our T6 tractor today, but in a sustainable package,” said Lennon.

In addition, the engine helps reduce noise by up to 3 dBA. Lennon said while this may not seem like a lot, it equates to a 50% reduction in drive-by noise. This he said is an important factor for many customers, particularly municipalities using the equipment near residential areas or for farmers working around animals, as well as during road transport.

Lennon said another important innovation for the new concept tractor was the design of the fuel storage tanks. The company used a composite layered tubular structure instead of the traditional cylindrical gas storage tanks utilized on previous prototypes. This allowed New Holland to roll and shape the tank around the standard shape of the tractor, enabling a sleeker design and unobstructed view as was the case with the previous design. The new tank also takes up the same space claim as a diesel fuel tank, easing system integration and minimizing any extra weight added to the tractor as is often a concern with alternative fuel vehicles.

The tanks are able to hold a full day’s worth (about 8 hours) of fuel, enabling the tractor to have the same autonomy of its diesel counterpart. Previous prototypes’ fuel tanks allowed only about 4-5 hours of operation before refueling was necessary. It’s also as easy to refuel, said Lennon, and takes a similar amount of time to do so as a diesel engine.

According to Lennon, much of the tractor’s styling was inspired by automotive designs. One of the areas where this can be seen most clearly is the hood and cab, which were considered as a single design element by blending the lines of the hood and cab into one. “Then together with this we integrated fender, fuel tanks and the front-end weight [to] create a flowing, stylish look, something you don’t expect from an agricultural tractor,” he said.

Legacy New Holland style elements were included as well such as the aggressive full air intake grills and signature lighting.

The integrated cab is made of a glass bubble, said Lennon, which creates wrap-around windows on all sides of the cab, as well as on top, to provide 20% more glazed area than a standard tractor. This enables 360-degree visibility in all operations, improving safety and operator comfort. The window glass is located on the outside of the cab frame to add more space inside for operators.

Also aiding visibility is the cab’s floating domed roof which provides a complete panoramic design, eliminating the potential for obstructed views, no matter the application in which the tractor is being used. Lennon said this feature is particularly beneficial when utilizing it for loader applications. Integrated into the roof is a receiver for New Holland’s Precision Land Management (PLM) technology.

When designing the interior of the cab, the company’s aim was to make it a clutter-free environment where operators can easily and comfortably access all of the controls and information they need. All essential tractor controls were placed on the armrest integrated with the operator chair. Additional parameters can be controlled through the headliner display located on the top right-hand side of the cab.

The main display screen is mounted at the center of the fixed hug steering wheel. Whether the steering wheel is raised, lowered or telescoped, Lennon said this display mounting ensures it will always be in the optimal position for the operator. Information screens can be swapped between the steering wheel mounted and headliner displays, as well. Operators simply need to swipe a specific screen from one display to the other.

Voice control and smartphone connectivity are also included as part of the concept tractor’s operator experience. Lennon said specific software for the smartphone enables connection between the tractor and the farm office. In addition, the phone can be used to control air linkage when hitching an implement to the machine in order to improve safety. Other automation and safety features from the company’s NHDrive autonomous concept tractor—which it displayed an updated version of at Farm Progress 2017 and will start testing with customers in the fall—are included, as well, such as obstacle detection. In place of external mirrors, 360-degree cameras are used on the tractor to offer improved visibility and demonstrate another concept the company sees the potential for in agricultural machinery.

Read more about cameras being used in place of mirrors in the article “Mirrorless Vehicles are Closer Than They Appear.”

During its presentation of the concept tractor, the company said some of the technologies used—particularly those within the cab—could be brought to other tractors and product lines in the near future, before the methane tractor itself goes into production.

Carlo Lambro, New Holland Agriculture Brand President, said the methane concept tractor is at an advanced stage, having been extensively tested in various conditions around the world. “The result we have reached at this stage is very encouraging, and I’m proud to tell [you] we are ready to start production of the methane tractor within the next 3 years,” he said. “Of course, we don’t see this as the end of the road. We are still looking to [the] next stage on our path toward truly sustainable [farming].”

As part of its clean energy strategy, New Holland has been testing and introducing various alternative fuel powered concept vehicles. Doing so ensures the company has the options available which best meet customers’ needs as they transition toward more alternative fuel use.

In 2009, the company presented a prototype hydrogen concept tractor, of which it displayed the latest version at the Farm Progress Show 2017, featuring New Holland’s proved out fuel cell concept. While the technology is ready, it is not yet cost effective and considered to be a long-term solution once the industry is better prepared to utilize it, the company said.

Also on display was a prototype propane powered tractor. New Holland introduced its first iteration in 2012 in the U.S. using its Boomer tractor model. Since then, it has conducted several customer tests, and partnered with the Propane Education Research Council (PERC) to evaluate the feasibility of using this fuel. Last year it introduced a new prototype using its larger T6 Series tractor. Carlo Lambro, New Holland Agriculture Brand President, said propane produces up to 805 less pollutant than diesel and brings significant cost savings to customers.

Read more about the advances in propane and other alternative fuels in the article “Growing Alternative Fuel Options.”

Like the methane concept tractor, the propane tractor offers diesel-like performance and is considered by the company to be at an advanced stage in development. Infrastructure for propane is more prevalent, with many farms already having propane on site. The company considers propane as the first step in the transition away from diesel fuel, followed by methane and then hydrogen.

Watch a video to learn more about the propane prototype tractor.