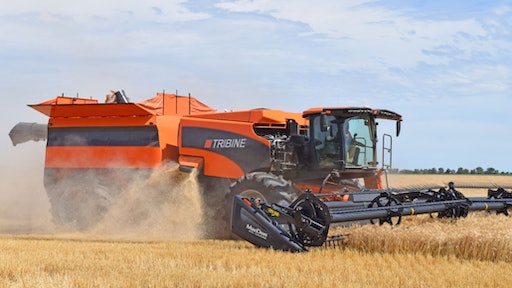 After a successful launch at the 2016 Farm Progress Show and Husker Harvest Days, Tribine Harvester has announced the release of the new and improved 2018 TRIBINE – Model T1000. Since the original release of the TRIBINE thousands of man-hours have been spent testing and refining the TRIBINE concept. The result is the new 2018 TRIBINE T1000.

Per Greg Terjesen, Vice President, Sales & Marketing for the company, “The changes we are announcing today are in addition to the engine upgrades announced last year, when we shifted to twin 9.0-L engines producing 650 continuous horsepower. The 2018 modifications are a direct result of customer input and untold hours of field testing.” A partial outline of major modifications and improvements made to the 2018 machines are as follows:

The TRIBINE continues to feature the world’s largest threshing and cleaning system, the largest grain bin incorporated on any combine, plus the industry’s only center articulated steering system featuring full time AWD, and rear wheel steering giving the operator the flexibility of having all four wheels in the same or opposite direction.

The T1000 features the lowest compaction of any harvesting system on the market today, making no-till practical and profitable in the corn belt. No other combine gives farmers the luxury of parking their tractors and grain carts versus continually crossing the field reducing yield and corresponding profitability.

According to Terjesen, the company will commence with further testing and field demonstrations in May, in various parts of the country depending on climate and crop conditions.

The new T1000 will be on display and working in the demonstration areas at both the Farm Progress Show and Husker Harvest Days. TRIBINE’s booth numbers are 1359 and 824, respectively.