The machines include Stage V engines and powershift transmissions to improve operator comfort and productivity. 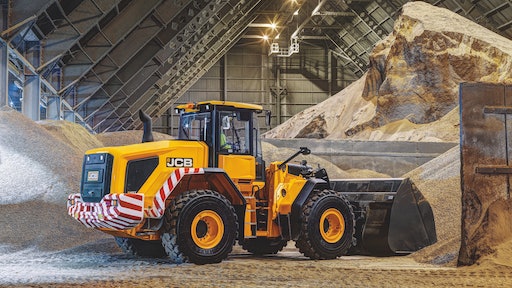 A new powertrain for the JCB 457 AGRI is among the upgrades for the latest versions of JCB’s three biggest bulk handling agricultural loading shovels unveiled at Agritechnica.

The new powertrain for JCB’s flagship agricultural bulk handling loading shovel not only delivers greater performance but also up to 10% fuel savings.

In its latest form, the JCB 457 AGRI displayed at Agritechnica is powered by a 6.7-L Cummins B-series engine (in place of the 7.7-L MTU unit installed previously) equipped with additional aftertreatment technology in a single, compact module to meet European Stage V exhaust emissions requirements.

A five-speed powershift transmission is now standard on the JCB 437 AGRI loading shovel, providing an extra speed and closer ratios for added efficiency in channelling increased power output from its 6.7-L Cummins engine, with a torque converter lock-up version available as an option.

Peak output is now 145 kW (195 hp) – an increase of 16 kW (12 hp) or 6.5% – over the previous model for a performance boost but there is also a second power curve topping out at 127 kW (171 hp) that can be selected for greater fuel economy when the loader is engaged in lighter loading or handling duties.

Both models now have automatic engine shut-down after an operator-adjustable delay at tick-over to minimize fuel consumption and unproductive engine hours.

In addition, the new forward-facing camera option is available for the Command Plus cab on these loaders and both benefit from the fit and finish improvements.