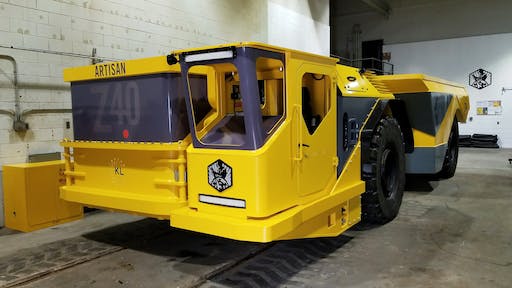 It was one year ago that Artisan put the mining industry on notice that times are changing with the launch of the first ever battery powered loader built from the ground up around lithium battery technology (the 153). One year later, Artisan showed the world that battery power is not just a promising experiment, but a powerhouse technology that promises to change the mining industry forever.

At its new facility in Kirkland Lake, Artisan’s top executives joined together with top executives from Kirkland Lake Gold and community leaders from Kirkland Lake to celebrate the launch of the first ever all battery powered 40 tonne underground haul truck. “It’s been a busy year for Artisan,” says Mike Kasaba, Artisan’s CEO. “We are astonished and thankful for the reception we have received both locally and throughout the mining industry. It’s clear that the mining industry is ready for the transformation that we are enabling.”

The Z40 40 tonne underground haul truck is not only zero emission, but also has the smallest footprint of any 40 tonne truck on the market. Enabled by Artisan’s extremely high powered electric powertrain system, the Z40 can operate in spaces designed for much smaller trucks. “The Z40 is a game changer for our Macassa mine site,” says Tony Makuch, CEO of Kirkland Lake Gold. “Being able to haul significantly more ore in each truckload means more production with a smaller truck fleet. This truck is a critical part of our expansion plans here in Kirkland Lake.”

“This first Z40 truck was assembled right here in Kirkland Lake with strong support from the local community and highly capable local vendors,” says Mike Mayhew Director, Mining for Artisan. “We are both impressed and thankful for how the local community has stepped up and is supporting our company and our mission.”

The launch event was attended by Tony Antoniazzi, the mayor of Kirkland Lake. “We are proud that Artisan has chosen Kirkland Lake as its home for its Canadian operations,” says Antoniazzi. “We are honored to be in the center of this important advancement in the mining industry. The Z40 is an impressive display of technology and we are excited that our local community has become such an important part of transforming the mining industry and improving the lives of underground workers everywhere.”

The Z40 Haul Truck ushers in a new era in underground hard rock mining. With its Artisan all-electric battery powered drive system, the Z40 has almost twice the peak horsepower of a comparable diesel machine. It is the smallest 40 tonne truck on the market. It produces zero poisonous diesel emissions and it generates only 1/8th the heat of its diesel equivalent. Artisan has optimized the recharging process to ensure that the Z40 will outperform its rivals on tonnes hauled per day. The Z40 reduces demand on the mine’s ventilation and cooling systems. It enables deep mining. It improves working conditions and creates a healthier environment for everyone underground.

A Matter of Survival 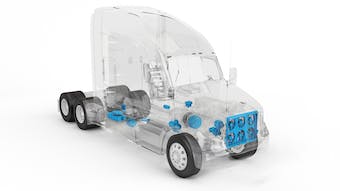 The underground mining loaders and trucks will be integrated with Sandvik's AutoMine and OptiMine technologies as well as other advanced features.
Sandvik Mining
July 22, 2020