The underground mining loaders and trucks will be integrated with Sandvik's AutoMine and OptiMine technologies as well as other advanced features. 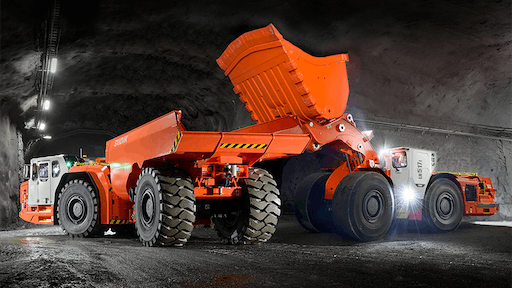 Sandvik is reintroducing its earlier, renowned Toro family name for its underground hard rock loaders and trucks, model by model, starting later this year. The Toro family name has been recognized by Sandvik underground mining customers for decades and now Sandvik is bringing back the bull, firstly with the large intelligent loaders Toro LH517i and Toro LH621i.

Toro, “the bull”, has traditionally symbolized the strength of Sandvik underground hard rock loaders and trucks since the first model was introduced in the early 1970s. Even though the family name has not been used for fifteen years, it has never disappeared from the thoughts of the company and many of its customers.

For the new generation of Sandvik loaders and trucks, the Toro stands for safer, stronger and smarter. “Safety is at the forefront of our product design and crucial for those who work in or around our loaders and trucks. We also believe that environmentally-sound solutions and sustainability principles firmly belong with safety. Being strong and powerful is at the very heart of the old Toro. To be robust, reliable and productive in the most demanding of conditions is part of our heritage, and we will keep that with us going forward. Being smart involves seamless integration with Sandvik’s AutoMine and OptiMine offering, but it is also about innovation and smart design: e.g. how we arrange maintenance access, improve efficiency and reduce waste. Developing intelligence on all frontiers is, and will be, one of the key elements of the Toro™ going forward,” says Wayne Scrivens, VP Product Line, Load and Haul.

The large intelligent loaders Toro LH517i and Toro LH621i now come with several design upgrades aimed to further boost productivity, reduce total cost of ownership and improve operator experience. Both loaders can now be equipped with a Stage V state-of-the-art engine, meeting the most stringent current emission regulations. Operator speed assist, a new feature that will be available with the Stage V engine option, specifically supports downhill tramming and preserves the equipment brakes as the Sandvik Intelligent Control System can be set to limit maximum speed. A new traction control system, available as an option, reduces wheel spin and slippage when penetrating to the muck pile, extending tire lifetime. Finally, a training simulator, Digital Trainer, has been added to the Load and Haul equipment range, offering a compact and flexible solution for the safe training of operators, with authentic controls and real loader control system.

As matching pairs for the large loaders, the 51 and 63 tonnes trucks will acquire the Toro family name amongst the first equipment models. Both trucks have recently been benefitting from several significant design upgrades including, for example, a new transmission, heavy-duty cooler, AutoMine for Trucks with on-surface navigation possibility and an ongoing Stage V engine trial. “Customer feedback on the i-series trucks indicates that overall maintenance costs have decreased compared to their predecessors, the Sandvik TH551 and Sandvik TH663: we have also received the same customer feedback on LH517i and LH621i loaders. Reducing costs in addition to the already-reported positive operator feedback clearly shows we are on the right track, which befits the Toro family,”, says Scrivens.

The fifth model acquiring the Toro family name is the world’s largest payload capacity underground loader, Toro LH625iE. The giant features a 25,000 kg payload capacity and is electrically powered by a trailing cable. The Toro LH625iE loader builds on well-proven technology, but also features the i-series intelligence needed for connectivity and digital solutions.