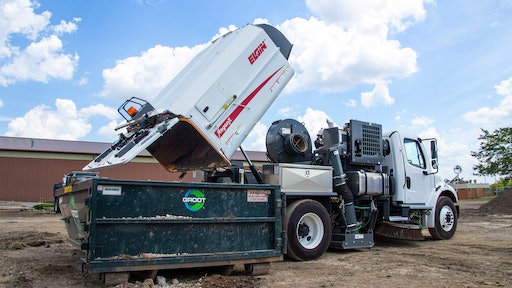 Elgin Sweeper Company announces the launch of the RegenX regenerative air street sweeper, a sweeper designed with the input of municipalities and contractors including operators, service technicians, fleet managers and public works directors across the United States and Canada.

Elgin Sweeper has been a leader in the sweeper industry for more than a hundred years and manufactures a full line of street sweepers including regenerative air sweepers. In designing the new RegenX, Elgin Sweeper formed an innovation team to perform several months of voice-of-the-customer research. They conducted hundreds of interviews and on-the-road ride-alongs with users of both Elgin Sweeper products and competitive sweepers to determine the features and qualities most important to them.

The team then developed a prototype and took the unit out to the market. They continued to collect feedback and make changes. After countless conversations and iterations, along with real-world testing, all the input came together, and they created the RegenX.

This new regenerative air sweeper is built with the quality and proven technology that is the hallmark of Elgin Sweeper vehicles, but is easier to service, simpler to operate and easier to clean than competitive regenerative air products —in fact, the smooth design of its hopper and 50-degree dump angle could make the RegenX the easiest sweeper to clean in the industry.

The RegenX also maximizes operator efficiency without the addition of premium mechanical parts, such as a scissor lift, that increase cost and can reduce capacity. As a result, the RegenX is the only sweeper in the industry to offer the ability to dump into roll-off containers while still boasting an impressive 8 yd.3 capacity.

“We couldn’t have developed the RegenX without our new innovation process,” says Mike Higgins, Vice President and General Manager of Elgin Sweeper Company. “The time and effort we invested talking with operators and users ensured we built a product that provides the ultimate user experience in regenerative air sweeping.”

The new RegenX will be officially introduced at the upcoming American Public Works Association Exposition (PWX), to be held Sept. 8-11 in Seattle, WA. The RegenX is also supported by a dedicated Elgin Sweeper team, coast-to-coast dealer availability for live demonstrations and support, and marketed under the theme: Built by Elgin. Designed by You, to give recognition to the role actual users had in the product development.