The VSD technology on the new Whirlwind1 sweeper makes it easy for operators to switch between road and work modes with a simple push of a button. 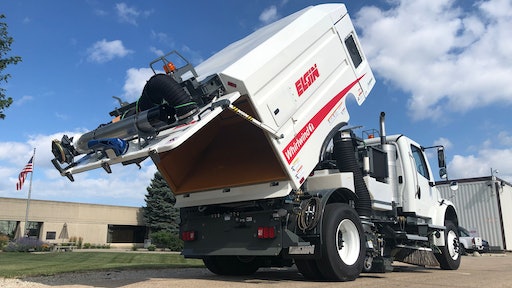 Responding to customer demand, Elgin Sweeper is introducing the Whirlwind1  vacuum sweeper, which shares the same innovative technology as the Crosswind1 regenerative air sweeper. The Whirlwind1 is ideally suited for uneven, patched roads and jobs involving dirt, sand, millings, and road debris while also being recognized as a proven tool for maintenance and restoration of permeable pavement.

“The VSD, installed between the chassis engine and the transmission on the Whirlwind1, allows the engine to simultaneously power both the truck and the sweeper,” Higgins adds. “The sweeper operator is able to switch between road and work modes with a simple push of a button, without the need to stop and engage the parking brake. The controls on the Whirlwind1 are simple and intuitive, allowing all operators to expertly sweep with minimal training.”

“Our customers have already seen how single-engine technology is changing sweeping, and our Whirlwind1 customers will see the advantages, too,” says James Crockett, Strategic Product Manager at Elgin Sweeper. “Since the introduction of the Crosswind1 in 2018, current Whirlwind customers, users of competitive models, and our own Elgin dealers have been demanding single-engine technology on the original Whirlwind. For sweeper customers, the single-engine technology provides several important benefits, including less maintenance, elimination of belts, fluid coupler and exhaust after-treatments, minimized auxiliary engine vibration and noise, enhanced overall equipment value, and decreased cost of ownership.”

According to Crockett, the most common complaints from twin-engine sweeper operators are related to the noise and vibration from the auxiliary engine. “Since the average operator spends eight hours a day sweeping, the noise and vibrations of the auxiliary engine and its drivetrain can cause significant operator fatigue,” he adds. “The single engine, combined with Elgin’s optional Quiet Pak sound-dampening technology, helps minimize vibration and noise on the Whirlwind1, without compromising machine performance.”

The time-consuming and costly maintenance checks, after-treatments and additional service requirements associated with an auxiliary engine are eliminated on the single-engine Whirlwind1 sweeper. “Oil changes, belt inspections and filter replacements on the Whirlwind1 will cost a fraction of the annual maintenance required on twin-engine sweepers,” Crockett says. “Those cost savings will have a much more positive impact on the customer’s bottom line.”

“Witnessing accelerated adoption of the Crosswind1 amongst municipal and contractor customers prioritized our rapid implementation of the new Whirlwind1 into our product lineup,” Higgins says. “The Whirlwind1 will be a huge benefit to customers looking for a vacuum sweeper that delivers greater efficiency, more quiet operation, and lower maintenance costs.”

“With the Elgin single-engine sweepers, you don’t have a separate engine to maintain, so I like that. There’s also no aligning belts and pulleys,” says Cason. “They sweep and pick up debris the same as the original sweeper configurations, which is great.”

In business for 30 years, Moby’s owns six Elgin Crosswinds and two Elgin Broom Bears. “I don't run any other sweeper brands other than Elgin Sweeper,” Cason said. In addition to sweeping for paving contractors, Cason and his team perform sweeping maintenance at concrete plants.

Setting the standard for single-engine technology

The single-engine Whirlwind1 and Crosswind1 sweepers are the latest examples of Elgin’s well-established track record of leveraging the Federal Signal innovation process.

“Our top priority at Elgin Sweeper is to provide customers with the right solutions to match their needs,” says Ron Schmidt, Chief Technology Officer at Elgin Sweeper. “We firmly believe that single-engine technology will be the standard for all air sweepers in the future. What originally began with the innovation process – seeking voice-of-customer feedback and collaboration on product viability – resulted in the successful market adoption of our single-engine technology.”

Ideal for ice and snow, the new radial tire is a mix of durability, high-load capacity and excellent traction.
BKT USA Inc.
September 8, 2022
Follow Us