The company recently demonstrated the use of precision technology for an autonomous tractor in Thailand. 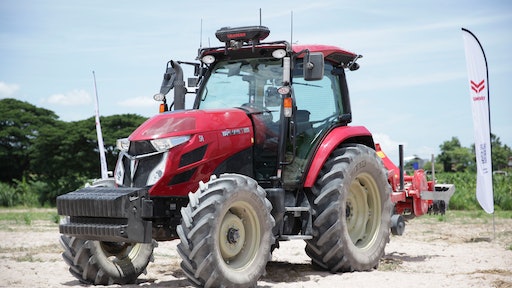 Yanmar has participated in a field test to demonstrate the use of precision location technology in autonomous agricultural equipment held by the Japan International Cooperation Agency (JICA) and the working group consisting of Thai and Japan organizations. The demonstration in the Sri Racha District of Chonburi, southeast of the capital of Bangkok, served to draw attention to the labor-saving potential of autonomous technologies in agriculture.

With the agricultural population expected to fall, even in Thailand, robot agricultural technologies will be required to maintain and raise agricultural productivity. The demonstration event was held with the cooperation of the Thai government to further develop precision positioning technologies. For its part, Yanmar is to conduct testing in Thai fields of its Robot Tractor that went on sale in Japan in October of 2018.

Through its participation in the demonstration event, Yanmar hopes to further the development of agricultural technologies in Thailand, while contributing to the realization of a sustainable agriculture through the delivery of labor-saving, highly efficient agricultural machinery and services enabled with advanced IT and communications technologies.

In February of 2015, the Thai and Japanese governments made a joint, top-level announcement regarding cooperation in the introduction in Thailand of electronic reference point network using satellite positioning technology. Then in June of 2017, the two governments concluded a memorandum of intent regarding cooperation on the improvement of electronic reference point network. Since then, the Japanese government has established the GNSS Japan Pavilion in the Space Krenovation Park of the Geo-Informatics and Space Technology Development Agency (GISTDA), to support development of high precision positioning technologies in various fields of industry.

The Thai government also operates various infrastructure such as the National Electronic Data Standards Center. In order to provide the Thai government with technical support in this endeavor, JICA gathers related basic information and carries out surveys, with Yanmar also taking part in demonstrations trials as part of survey activities, towards technology adoption in the agricultural domain.

In addition to advancing forward, “Auto Mode” allows the tractor to automatically drive in reverse, stop and execute turns. In “Linear Mode,” while certain driving maneuvers such as turning are performed by hand, the tractor can travel back and forth on its own when cultivating land. Switching between these two modes is possible in the 2-Series, allowing you to customize it for different operators, or according to skill of the individual and the work itself.

Assuring safety for those in the proximity of the Robot Tractor, which is capable of unmanned driving and operation under the surveillance of an operator, are numerous sensors and safety lights. Also, the user can perform functions such as emergency stops on the control tablet.