ATDynamics has formed a partnership with TNT Express and Ephicas, who will use the company's TrailerTail technology to reduce oil dependence. 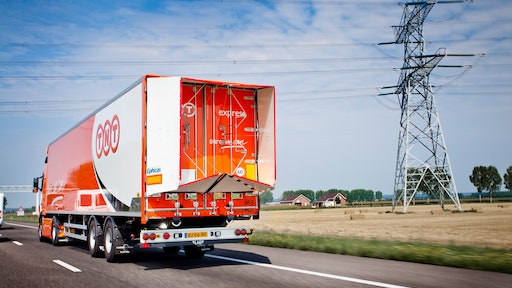 ATDynamics, Inc. announces that its proprietary TrailerTail technology, called “EcoTail” in Europe, has been tested in the Netherlands by TNT Express, one of the largest express delivery companies in the world, and Ephicas, a leading European aerodynamics company. The testing of the initial TrailerTail device to operate in Europe delivered 6% fuel savings over the five month testing period.

“Reducing carbon emissions and the transportation industry’s dependence on oil depends on rapid innovation and technology adoption worldwide,” comments Andrew Smith, CEO and Founder of ATDynamics. “The comprehensive fuel economy and safety testing pursued by TNT Express in Europe will further accelerate adoption of our technology.”

Approximately 5,000 TrailerTails have been deployed on U.S. highways and ATDynamics is working with leading U.S. trucking fleets on a campaign to deliver 50,000 tails by 2014. Each TrailerTail saves approximately as much fuel as removing one passenger vehicle from the road.

ATDynamics will work with Ephicas and TNT Express to ensure that an EU version of the TrailerTail will provide maximum safety and fuel efficiency to the European trucking industry.  Partner company Ephicas required permission from the ‘Dienst Wegverkeer’ (RDW) to be able to run the TNT Express pilot, since the Netherlands does not presently have a length exemption for aerodynamic devices.

The TrailerTail extends approximately four feet beyond the rear of a trailer to minimize low pressure aerodynamic drag at highway speed. After safety tests, the RDW allowed a temporary exemption given that these tests align with the Transport White Paper targets to reduce CO2 emissions by 60%.

The next phase of this collaboration will be to extend the TrailerTail test to multiple vehicles, with domestic and cross border destinations in Europe. Ephicas, together with partner PART (Platform for Aerodynamic Road Transport) is also in talks with policy makers in Brussels to adjust regulations regarding maximum vehicle length for the use of aerodynamic tools.

The operational tests performed by TNT showed 1.65 litres of fuel saved per 100 km, which translates to over seven gallons saved per 1000 miles traveled. The vehicle speed in the test was limited to 80 km/hr or approximately 50 mph. “Savings on the fuel cost is an interesting business case, but also helps us to reach our goal of decreasing the CO2 emissions of our operations,” says Irma Blanke, Director of Operations & Services for TNT Express Benelux.

In addition to testing the fuel savings of the TrailerTail, TNT was interested in the operational functionality of the device and found that the TrailerTail did not pose the driver any problems or cause any delays while docking, loading or delivering. The TrailerTail opens and closes automatically when a driver accesses the rear cargo doors.

“Accurate, real-world fuel efficiency testing is time consuming and expensive for the typical trucking fleet, and requires significant data monitoring,” says Jeff Grossmann, Vice President of Engineering for ATDynamics. “The testing conducted by TNT and Ephicas provides real-world data which will allow fleets to feel confident in the rapid adoption of next generation semi-trailers.”