Two Manitowoc Potain self-erecting cranes are helping with construction on a crowded Indianapolis jobsite due to their ability to operate in limited space. 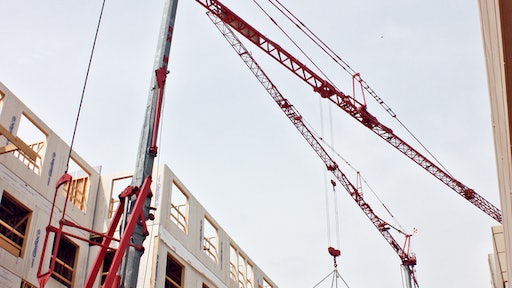 Two Potain HDT 80 self-erecting cranes are helping build an apartment complex in downtown Indianapolis, IN. The contractor, Larry R Wagler Construction, chose the cranes for their easy assembly and ability to operate in limited space.

“The Potain self-erecting cranes are great for compact jobsites. The cranes take very little room to set up,” he says. “They’re also quick to erect.”

On this job, the cranes are setting walls and trusses for an apartment complex called The Avenue. It is located in a crowded urban area near the Indiana University campus. Despite the small jobsite, the cranes are able to work efficiently, even with overlapping operation zones.

Potain self-erecting cranes also allow owners to eliminate a second signal person during crane operation, saving labor costs. The cab on the Potain HDT 80 travels up the mast and allows the operator to follow the load during the entire pick. Alternatively, the crane also comes with a radio remote control that runs the crane as the operator walks alongside the load. These features make for a safer jobsite.

Compared with other material handling options, the reach of self-erecting cranes relative to the required space on the ground stands out. The Potain HDT 80 can operate at three different mast heights and has a maximum working radius of 148 ft, but it has only a 15 x 15 ft footprint.

The cranes, one owned by Larry R Wagler Construction and one rented from R. H. Marlin Crane Rental, both based in Indianapolis, will remain on the jobsite for four months.