Freightliner Trucks has released its new 2014 Cascadia Evolution Class 8 truck, powered by a Detroit engine and offering a 7% improvement in fuel efficiency. 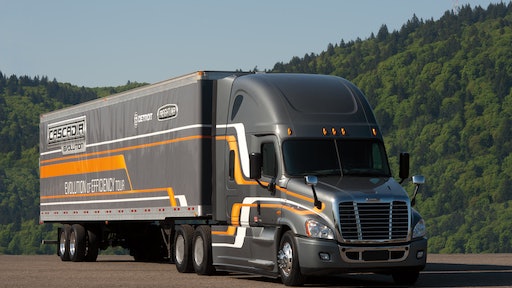 Freightliner Trucks introduces the 2014 Cascadia Evolution Class 8 truck model. Powered by Detroit and featuring some of the most advanced aerodynamic enhancements in the industry, the Cascadia Evolution delivers up to an additional 7% improvement in fuel economy over an EPA 2010-compliant Cascadia equipped with a first generation aerodynamic package and up to a 5% improvement compared to a current model year 2013 Cascadia equipped with the latest aerodynamic upgrades.

“With the introduction of the Cascadia and Detroit DD15 in 2007, our priority was to help customers lower their total cost of ownership through improved fuel efficiency and performance,” says David Hames, general manager, marketing and strategy for Daimler Trucks North America. “The Cascadia and the DD15 have since made a powerful impression on businesses.”

Continues Hames: “Now, with the Cascadia Evolution, we are building upon our commitment to maximizing our customers’ bottom lines with new product advancements that will deliver unprecedented fuel efficiency.”

Cooling enhancements include a 1,400 square-inch radiator, which features a revised baffling system and new radiator mounting design that contribute to improved cooling capacity and increased durability.

Also standard with the Cascadia Evolution is Freightliner’s proprietary Run Smart Predictive Cruise system. This innovative technology evaluates the road profile more than one mile in advance, determines the most efficient vehicle speed, and then adjusts the actual speed of the truck for maximum fuel efficiency.

“We examined every detail to ensure that no stone was left unturned when developing the Cascadia Evolution,” says TJ Reed, director of product marketing for Freightliner Trucks. “The result is a truck that will immediately benefit fuel economy performance and overall cost of ownership."

The Detroit Difference
Available only in the Cascadia Evolution, the newly designed DD15 engine features a proprietary asymmetric turbocharger with a next-generation amplified common rail system (ACRS). The asymmetric turbocharger is less complex than variable geometry turbos and, because it is proprietary, is optimally matched to the DD15’s EGR system for best real world fuel consumption, resulting in excellent performance. The next-generation ACRS also delivers higher injection pressure for better combustion control and a simplified design for optimal regenerations.

Further adding to the overall performance of the Cascadia Evolution, the DD15’s BlueTec emissions technology 1-Box package has been optimized to decrease size, weight and complexity.

The Detroit Virtual Technician system – standard on the Cascadia Evolution – helps reduce downtime and decrease maintenance costs by providing real-time engine diagnostics, enabling drivers and fleet managers to quickly and accurately evaluate events, and in many cases allowing them to remain driving when others would have to stop to evaluate the event. It also minimizes time in the shop by almost eliminating the diagnostic time since it is completed when the truck arrives by the Detroit customer support center.

“Powered by a Detroit engine and advanced technology, the Cascadia Evolution is a formidable business tool that doesn’t sacrifice power for efficiency,” says Reed.

Leading the Green Evolution
The Cascadia Evolution is Freightliner’s most recent addition to its line-up of fully compliant GHG14 vehicles.

In February 2012, the Environmental Protection Agency (EPA) certified DTNA’s complete portfolio of model year 2013 on-highway, vocational and medium-duty vehicles as fully compliant with the new GHG14 regulations. DTNA is the first and only North American commercial vehicle manufacturer to be certified as GHG14 compliant.

Freightliner Trucks will start production on the Cascadia Evolution in 2013.