A Potain crane from Manitowoc is helping construct a Pennsylvania hotel in record time. 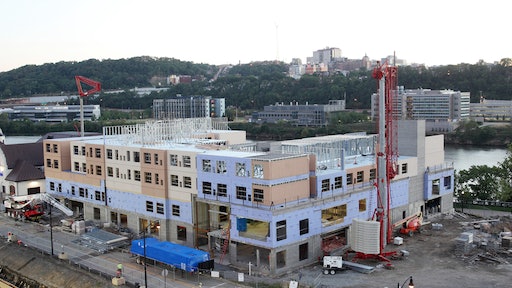 A contractor building a new Hyatt hotel in Pittsburgh, PA, is finding that Potain self-erecting cranes can complete its construction work much faster and more securely than it once thought possible.

Patrinos Painting & Contracting, a contractor based in Bethel Park, PA, is using a Potain Igo 50 and an HDT 80 to construct the new Hyatt hotel in Pittsburgh. Bill Knerr, director of operations at Patrinos, says quickly completing the job would have been “virtually impossible” without the Potain tower cranes.

“The Potain cranes, especially the Igo 50, are saving us up to a week and a half for each floor of the hotel we are building,” Knerr says. “The only reason this operation is proceeding so quickly is because of the Potain cranes. The time we’re finishing this hotel in is unheard of.”

The Potain cranes are lifting 653 structural metal stud and interior load bearing panels onto the seven-story structure, some weighing up to 2,500 lbs. The hotel is U-shaped, so Patrinos placed a Potain crane on two of its corners. The erection began in May and is expected to finish in August – much earlier than Patrinos had originally projected.

Knerr says a similar job the company completed in Reading, PA, took seven to 10 days longer to build each floor. He points to the remote control of the Igo 50 as one of the features helping to complete the work so quickly.

“The operator is on the deck with us, with a remote control pack around his waist,” Knerr says. “He’s able to look at the panel as he’s flying it the entire time. Also, it’s more secure because we don’t have to worry about miscommunication.”

The Igo 50’s small 14.8 ft. x 14.8 ft. footprint is also crucial to the job’s success. The new hotel is in a section of downtown Pittsburgh with limited space. The jobsite is flanked by a nearby restaurant, office building and the Monongahela River. The Igo 50 is placed only 3 ft. from the property’s edge.

Chris Witte, an account executive at American Contractors, says the Potain cranes’ small footprints were perfect for the jobsite’s tight space requirements, and that their radio control boosted efficiency.

“With both Potain cranes being radio controlled, Patrinos was able to run the cranes with only one of American Contractor’s crane operators,” he says. “It’s unique because our operator is working on the deck of each individual floor. He’s working right alongside the guys from Patrinos, which makes the work faster and more secure.”

Patrinos has been in business for more than 40 years and has approximately 200 employees. It’s worked on premier jobsites like the Penn Hills High School, Providence Point Assisted Living Residence and an expansion of Magee-Womens Hospital of UPMC. The general contractor on the job is Pittsburgh-based construction giant Rycon Construction.

Erecting the new Hyatt hotel with the Potain cranes has been such a success, that Knerr considers the method a game changer. He envisions dormitories, group residences and other large buildings being constructed in the same manner as the new Hyatt, using Potain cranes to remotely fly in metal panels, and traditional wood-framed panels.

“I’ve had conversations with other developers,” Knerr says. “They see us erecting a hotel in such quick time and they’re thinking, ‘Wow. This may be the future of building.’”