Three Potain tower cranes are being used on a construction project on the coast of Southern Italy due to their build capacity and rugged design that will withstand the harsh operating environment. 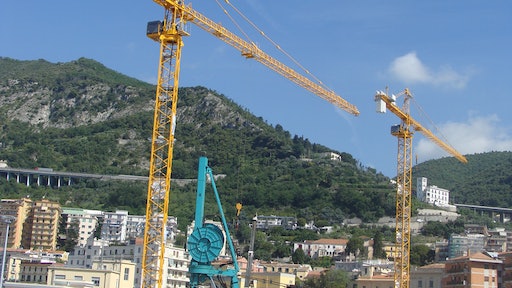 Three Potain tower cranes will spend the next three years working in strong winds and sea air at an extensive coastal development in Salerno, southern Italy. The cranes, which were erected earlier this year, are lifting a variety of construction materials and equipment to build a seven-story crescent shaped building that will define a new landscape for the city’s port.

The three cranes are 12 t capacity MD 310 C K12s, two of which are owned by RCM Costruzioni Spa and the other by Ritonnaro Costruzioni Spa. The two main contractors are working together in a joint venture on the project.

Enrico Angiolini, Manitowoc’s sales director for southern Europe, says there was strong competition among the crane manufacturers to supply equipment for the project, but Potain was eventually selected for its build quality and rugged design.

“Working on this important project for three years in a marine environment demands a lot of these cranes,” he says. “Our Potain brand is known for durable products and we use the latest paint technology to protect every inch of the cranes. The strong winds at the site could also cause problems but we are confident in their control and strength.”

The cranes are working up to eight hours a day, six days a week. They are responsible for a range of activities including ground preparation work and lifting 10 t reinforced concrete slabs that will make up the structure of the modular-designed building.

Two of the cranes are working at hook heights of 36 m and the third crane operates at a height of 46 m. All of the cranes are configured with 55 m jibs and provide complete coverage of the site. The first crane was erected in April with the second and third added in May and June respectively.

The development, dubbed “the front of the sea” project, is located between Salerno harbor and the marina. It comprises a large semi-circular building called The Crescent, which borders a public square between the building and the sea.

The first two floors of the seven story building are for commercial use and will include retail outlets, restaurants and offices. The upper levels will be residences with two additional underground levels forming a car park.