Odyne recently exhibited its hybrid propulsion system at both ICUEE 2013 and the Plug-in Conference. 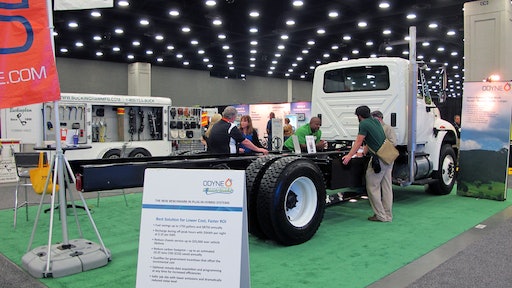 Waukesha-based Odyne Systems LLC, a leading manufacturer of hybrid systems for medium- and heavy-duty work trucks and winner of the NTEA 2013 Green Award, displayed its advanced hybrid propulsion system at both the ICUEE 2013 show in Louisville, KY (October 1 to 3) and at the Plug-in Conference (September 30 to October 3) in San Diego. Of interest to show attendees was news that Odyne was recently selected to participate in a $45.4 million U.S. Department of Energy (DOE) award to develop and deploy over 120 plug-in hybrid systems for trucks throughout North America. The program strongly positions Odyne for high volume sales of its enhanced system.

The plug-in hybrid system on display at ICUEE, featured on an International chassis, and at Plug-In, on a Ford F750 chassis, is designed to interface with a wide variety of truck-mounted equipment, saving fuel, reducing emissions and providing quieter operation at the work site. Odyne’s plug-in hybrid truck system reduces fuel consumption by up to 50%, depending on application. It also increases power while driving by using a rugged Remy electric motor in parallel with the existing drive train to provide launch assist and regenerative braking. At the worksite, the Odyne hybrid plug-in battery system, featuring Johnson Control’s lithium-ion battery packs, provides all day hybrid power on the job.

Joe Dalum, President of Odyne Systems LLC commented during a press conference September 30 at Plug-In, “We are excited to be introducing several recent developments that are continually advancing hybrid and truck electrification technology. Odyne’s worksite ePTO functionality and enhanced transmission propulsion interface, developed in coordination with Allison Transmission, Odyne’s investment partner, provide unique benefits during both driving and stationary operations. Odyne had increased standard exportable power from the hybrid batteries by 60% to help eliminate the use of separate generators, incorporated state-of-the-art telematics as standard equipment, and improved overall hybrid efficiency in comparison to earlier systems. The recent award from the DOE is very significant and will put the advantages of hybrid systems for large trucks to work in communities throughout North America. We also anticipate that the award will accelerate wide-scale use of our hybrid systems.”

Odyne holds six U.S. patents and two international patents in the hybrid field and another 20 patents are pending.