Axles Adjust at the Push of a Button

An agricultural OEM partners with a drivetrain component manufacturer to create an easier means of adjusting axle widths and increasing farmer productivity. 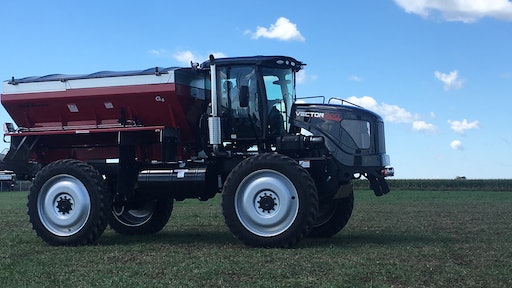 The VTA enables a full 15 in. (38.1 cm) extension of the axles on each side of the machine. Previously, fixed axles were used on the machine which would require the wheels to be removed in order to adjust the axle width to accommodate varied crop spacing. Jason Eaton, General Manager of RBR Enterprise, says this is very labor intensive, often requiring half a day to complete. The VTA, on the other hand, simply requires the operator to push a button in the cab to adjust the axles; the process takes about 30 seconds, enabling farmers to continue with their work.

An easier, and safer adjustment process

To adjust the axles, an operator navigates to the axle adjustment page on a 7 in. (17.8 cm) touchscreen display within the machine cab and selects the desired track width. The tracks are able to extend from 114-144 in. (289.6-365.8 cm); customized widths are possible, as well. Once an operator selects a track width and pushes the adjustment button, the tracks automatically begin to adjust.

As the axles adjust, engine speed is brought down to 1,000 rpm. Glen Gaines, RBR’s lead engineer on the project, says the hydraulic cylinders used to adjust the axles require the machine to be moving at a slower speed in order to do the adjustment. Engine speed is maintained throughout the entire adjustment process, ensuring the machine continues to travel at a safe speed and eliminating the need for operators to manually keep the machine at a steady speed. Gaines says the operator simply needs to push the adjust button and step on the gas pedal to engage axle adjustment. “Then when the engine ramps up again, you know [the process is] done,” he says.

Electronics within the cab are used to control the system’s hydraulics. Steering is also now all electrical, says Eaton, whereas previously it was hydraulically controlled. This enables the company to tailor the machine to individual customer needs, and write different programs into the axle system to customize it to certain crop types and applications.

While there are similar adjustable track axle systems on the market, Eaton says the VTA offers more adjustment capabilities, increasing the range of crops for which the applicator can be used. In addition, a key differentiator is the fact that a 32,000 lb. (1451.5 kg) capacity is maintained through all track widths. “We’re able to maintain the same fertilizer or chemical capacity in all variations of the track,” he says.

Two and four wheel steering modes are included on the Vector 300. To switch between the two, once again operators simply need to push a button located on the right armrest of the chair within the cab. Gaines says the machine’s wheels do need to be straight in order to engage the four wheel steer capability.

With two wheel steering, the machine has a 30 ft. (914.4 cm) turning radius and only the front wheels are used. Four wheel steer, on the other hand, uses both the front and rear wheels to provide about a 12.5 ft. (381 cm) turn radius. Eaton says this is beneficial as farmers are now planting their rows closer to the edge of their fields—and no longer leaving an area to turn the machine around—requiring a tighter turning capability to minimize crop damage. “With the four wheel steer, the rear wheels follow the front, so there’s only one set of tracks,” he explains. A standard two wheel steer machine, he notes, creates two sets of tracks because the rear axle is being dragged during the turning process.

Gaines adds that operators do not need to constantly turn four wheel steer on and off. Once the machine reaches 12 mph (19.3 kph), the wheels are locked so they do not turn. He says this is for safety, as that would be too fast a speed to turn the vehicle, as well as helps to quickly get the applicator moving in a straight direction once again.

A crab steering feature was also included to aid safety and maneuverability on hillsides by ensuring no loss of traction. This feature basically allows operators to walk the machine sideways, says Gaines. The machine can be put into a 10 degree turn to counter the slide that would otherwise occur when driving a piece of heavy machinery along a hillside. The wheels can be turned as much as 30 degrees, he says.

Eaton says it was a close collaboration between RBR and AxleTech on the development of the VTA. He also notes there were not many changes necessary in order for AxleTech to adapt the axles to RBR’s current machine design.

One of the benefits he noted of working on the project with AxleTech was the amount of testing that occurred on the system prior to its release. He says traditionally within the agriculture industry testing is done at a customer’s expense. However, for this project, AxleTech had the system tested at a third party automotive Tier 1 testing facility. It underwent about 8 weeks of testing, which equated to 5 years of field use. He notes that a lot of time was spent repeatedly adjusting the axles to ensure their reliability and robustness.

The VTA will be available at the end of the year, with full production expected to start in the fourth quarter.

The electric axles feature a two-speed transmission integrated into the central housing which aids speed and efficiency.
Allison Transmission
October 9, 2020

Join us August 25th at 10am CT to learn about the benefits of flexible shafts and how they can simplify or replace conventional methods of power transmission such as belts, pulleys and universal joints.
August 8, 2022
Axles

The new AFE Series e-axle for off-highway and specialty applications was introduced at bauma 2019.
AxleTech
April 8, 2019
Follow Us