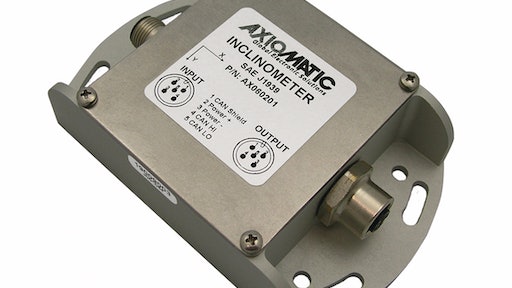 Axiomatic's family of inclinometers and tilt sensors has a series of new low cost units that can measure ±90º degrees or 360 degrees angular rotation. The AX06025X series features CANopen networking, a RS-232 port or 3 Voltage Outputs for communicating the angular measurement.

• Vertically installed, it can measure an inclination angle in one sensing direction in the ±180º (0-360º) range

• Angles measured by a two-axis MEMS sensor, which senses acceleration caused by the gravity force

• Output signals from the MEMS sensor are processed by microcontroller to receive inclination angles; resolved angles can be then sent to the CAN bus, RS232 port or output as 3 0-5V signals