The Farm of the Future

A company partners with a community college to further the development of agricultural technology and the future engineers. 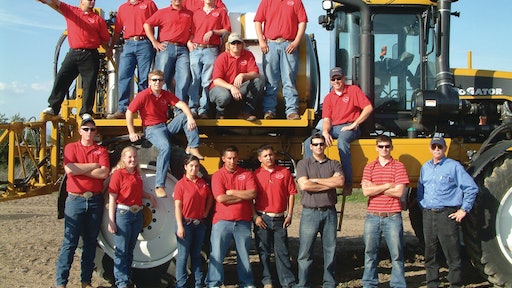 There is a delicate balance that must be upheld in order for opposites to work in harmony. California's Central Valley exemplifies that balance.

On one hand, it's one of the world's most productive agricultural areas, where the ancient art of farming is practiced and thrives on an industrial scale.

On the other hand, it's virtually next door to Silicon Valley, a technological breeding ground where many of the world's most advanced technologies are created and developed.

One of the keys to West Hills' success has been the solid relationships the school has built with private businesses, both in surrounding California communities and across the nation. Over the years, those relationships have led to the development of many programs based on innovative applications of advanced technologies; one such program is the West Hills Farm of the Future.

The program is an outgrowth of a partnership between West Hills and Topcon Positioning Systems (TPS), a precise positioning systems provider based in Livermore, about two and a half hours west of the college.

Precision agriculture — says WHCC agricultural science and technology instructor, Clint Cowden, who heads the Farm of the Future program — links an advanced geometric information system (GIS) based on data from global positioning system (GPS) satellites. TPS also utilizes the Russian-based GLONASS and, in the future, the European Union's Galileo and China's Compass satellite constellations with its patented G3 software, making it possible to optimize the inputs for every square foot under cultivation. (For more information, see the March 2007 issue of OEM Off-Highway magazine.)

"Farm of the Future is about precision agriculture," explains Cowden. "Agriculture is really a manufacturing industry like any other. The inputs are seed, fertilizer, soil and chemistry, and, in order to achieve a profitable output, we need to maximize the effectiveness of each input. Our Farm of the Future program is based on using advanced technologies to optimize the whole production process.

"Progressive farmers have always kept detailed records of inputs and crop yields, but until recently it hasn't been practical to gather and apply that data to anything much smaller than a field, which might easily be several hundred acres.

"Actually, the entire process is quite similar to the way the construction industry uses GIS and computer controls to do precision earthmoving, pavement building and other operations."

WHCC also offers training in diesel mechanics and construction equipment operation, which is where the relationship between the school and Topcon began. John Dice, TPS' senior training manager, worked with WHCC to equip the school's bulldozer with an automation system the company donated to the college.

As part of that effort, Dice also presented training classes to familiarize students with the new equipment. It was through these classes that Dice met Dr. Larry Rathbun, dean of the Farm of the Future program.

Cowden encouraged several of his agricultural students to sit in on the construction classes, and then attend an agricultural field day at Topcon in Livermore. This included a plant tour and training class covering the use of Topcon systems on equipment including a variety of sprayers.

TPS president and CEO, Ray O'Connor, is a strong supporter of the kind of private/public relationship his company has developed with WHCC.

"This is absolutely a win-win situation," O'Connor says. "From a purely business point of view, our relationship with WHCC gives us access to a large, diversified facility where our equipment can be tested under totally realistic and strict academic conditions. We do cooperative training events for our own people at the college, and take full advantage of the classroom programs and staff expertise they offer."

On the educational side, "the intense cooperation between WHCC and Topcon enriches the student experience, and ultimately benefits the agricultural industry as a whole," adds WHCC chancellor, Frank Gornick. "WHCC students enter the job market with skills and experience gained using the very latest technologies. That makes them more valuable individually, and helps improve the industry's overall productivity, which benefits everyone who eats in the long run."

O'Connor says, "In today's world, you either have to get on the technology bandwagon or be left behind. That's true in the construction industry, and it's just as true in the agricultural industry. We are really proud to be part of both WHCC's Farm of the Future program and its precision positioning technology program."

Richard Larson, the new director of Farm of the Future program, explains the tremendous benefit the program provides for engineering students to get hands on experience during the learning process. "It gives them a perspective that you don't get from a book," he states. "You can learn the theory, but until you start applying that theory, you really haven't learned the whole package. [The students] love being able to see results. Instead of solving an algorithm, they get to see the machine actually do something."

The satisfaction the program gives to students encourages them to continue to study engineering with a passion and vivacity that was thought to be falling to the wayside. Seeing results pushes students to experiment and test more, producing new results and possibly developing new technology along the way.

"Construction and precision agriculture applications of this technology really have a lot in common," Dice says. "In California's Central Valley, for example, much of the irrigation is done by flooding the fields. That means they have to be level to minimize the amount of water required, and also to make sure the water is distributed evenly over the whole area.

"In the past, that was done with conventional surveying techniques, and more recently with laser equipment. Now, we can use a bulldozer or grader equipped with a GIS/GPS system interfaced with the machine's hydraulic controls to achieve precision measured in millimeters over hundreds of acres. It's faster; it's much less expensive, and it's a lot more accurate."

Topcon has a joint venture company with hydraulic system manufacturer and supplier Sauer-Danfoss, TSD Integrated Controls, to produce solutions for construction and agriculture equipment based on this technology.

"The principle is the same, but the details are a little different in agricultural applications," says Rathbun. "Here, we are interested in optimizing the inputs down to the square-foot-level. So, instead of moving the blade of a bulldozer or grader up and down, we are varying the amount of a specific nutrient being applied to the soil at a specific location in the field depending on actual soil conditions. It's all data-driven and controlled by the onboard computer in the tractor's cab."

Topcon donated an X20 controller to WHCC for use in the Farm of the Future program. The X20 is a rugged, Windows-based computer produced by KEE Technologies of Australia, a Topcon company.

The X20 integrates location information generated by a Topcon satellite signal receiver with an internal GIS database to accurately track the position of the tractor or sprayer in the field, calculate the most efficient path for the equipment to take, and display steering information for the operator to follow. The X20 is also able to control an automated steering system on tractors equipped with that technology.

Allowing students the opportunity for hands-on experience with the industry's latest technology is the best way to keep future engineers up to date. Keeping a student cooped up in a classroom does little for both the students and their future employers. The Farm of the Future program combines practical application with cutting edge technology, allowing both the student and the technology to develop to its highest potential.

MEMA, HDMA Join Coalition to Shape the Future of Automated Vehicles Through Education

Partners for Automated Vehicle Education (PAVE) works to inform and educate the public and policymakers on the facts regarding automated vehicles.
June 8, 2020

IDTechEx's latest report indicates the use of robots and artificial intelligence will continue to grow in the agricultural industry.
May 29, 2020

RCT will manufacture and supply its suite of autonomous technology solutions which Haein will provide to heavy industries in South Korea including mining and construction.
Remote Control Technologies Pty Ltd. (RCT)
May 27, 2020

Over the past 6 years the Caterpillar autonomous fleet of Cat 789D, 793D, 793F and 797F mine trucks have achieved a milestone of 2 billion tonnes of material hauled.
Caterpillar Inc.
April 30, 2020
Follow Us