Volvo CE has received an INTERMAT 2012 Innovation Award for its On-Board Weighing System. 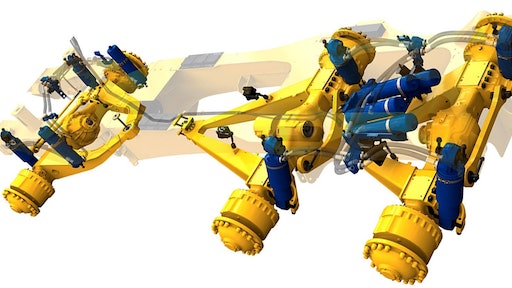 From over 100 entries from leading manufacturers, a high level jury of industry experts has judged Volvo Construction Equipment’s (Volvo CE) On-Board Weighing System for its F-Series haulers a winner in this year’s INTERMAT 2012 Innovation Awards.

The aim of the INTERMAT 2012 Innovation Awards is to reward the most innovative equipment and techniques in the industry. The jury, under the chairmanship of the president of the French National Federation of Public Works, announced its decision in Paris on January 13 to an audience of international journalists.

Volvo’s revolutionary On-Board Weighing (OBW) system is available for its full suspension haulers and gives an unprecedented insight into machine productivity. The system monitors the input of weight on the machine from pressure sensors and relays this information to load software integrated into the machine’s electronics.

Fully automatic, OBW logs all transported loads and the ensuing data is then displayed on the operator’s display. The information can also be accessed remotely, thanks to Volvo’s advanced CareTrack telematics system. This allows complete payload management – giving access to data such as total transported load in tons; tons transported per liter of fuel and number of cycles.

The system highlights if the machine has been overloaded during any of its cycles and a load indicator light mounted outside the machine. A yellow light comes on when at part load, which changes to a green light at nominal load – finally turning red when overloaded. This simple tool helps prevent overloading and the machine wear, tire damage and excess fuel consumption that go with it. The nominal load can be preset to suit material and site requirements.

OBW, together with fuel consumption data, help show the true productivity of the machine, combing fuel efficiency with tons of mass moved. Additionally, it can help in improving operator performance. The OBW system also offers the ability to unlock a wealth of previously inaccessible information, such as the weight of ‘carry-back’ left in the haul body after tipping.

Volvo will receive its prize on the first day of the INTERMAT Exhibition in Paris on April 16.

Explore various architecture approaches, driven by specific applications, that the commercial transportation industry is taking on the road to vehicle electrification. Download the whitepaper now to learn more.
November 2, 2020