Demand for autonomous trucks in the logistics industry is anticipated to outpace that of the mining industry says a new report from Transparency Market Research. 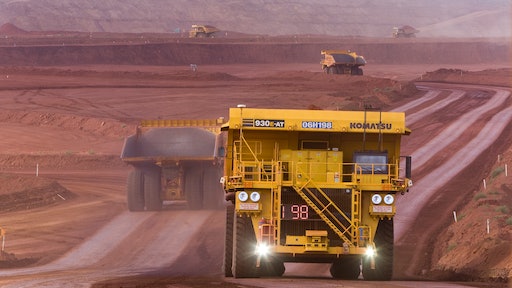 Komatsu's Autonomous Haulage System for mine trucks has now moved over 2 billion tons of material.
Komatsu

A new report from Transparency Market Research entitled "Automated Truck Market" indicates the global automated truck market is projected to reach a value of ~US$ 2 billion by 2027. The market will expand at a CAGR (compound annual growth rate) of ~55% during the forecast period.

Automated trucks are most likely to impact the logistics and mining industries, owing to extensive utilization of automated haul trucks in mines and rising investments by key truck manufacturers and technology companies in the development of autonomous trucks for the logistics industry.

Mining has been utilizing automated trucks for several years now, with companies such as Caterpillar and Komatsu having the largest fleets in the field. This application is particularly suited to automation due to the repetitive tasks involved and the work sites being private, therefore minimizing the chance of any safety issues.

The rising inclination of the automotive industry toward vehicle connectivity and intelligent transportation has prompted manufacturers in other segments, such as trucking, to focus on the development of autonomous vehicles.

The automated truck market in North America is projected to expand at a high pace due to the significant shortage of truck drivers in the U.S. and Canada.

Automated trucks are also able to work for longer durations without any break, resulting in higher work efficiency. These vehicles can also operate at any time of day, such as late in the evening, allowing for potential productivity increases as the trucks can be working when there are fewer vehicles on the road which might otherwise impact routes or delivery times.

The rate of adoption of automated trucks is expected to be significantly high in the near future due to the many advantages it can offer fleets' business costs.

High investments for the automation of mines by large mining companies such as Rio Tinto and BHP Billiton are anticipated to boost the demand for automated haul trucks to be used in the mining industry, as well.

Fortescue Metals Group (FMG) is also increasing investments in autonomous mine trucks. The company recently moved 1 billion tonnes (1.1 billion tons) of material using Caterpillar Inc.'s Cat MineStar autonomous haulage technology, Command for hauling. Use of the system has provided a 30% improvement in productivity for FMG. As such, the company continues to expand its fleet; it plans to have 175 autonomous trucks at two of its mine hubs by mid-2020.

Komatsu recently announced it was deploying 37 autonomous haul trucks in Brazil which will utilize its Autonomous Haulage System (AHS). AHS has been operating commercially for over a decade and in 2018 reached a milestone of having safely moved over 2 billion tons of surface material.

Demand based on vehicle types

Thus far, cabless trucks are only in the concept stage and are still undergoing testing. The high cost of these vehicles is also a hinderance at the moment, the report says. It forecasts there may be introduction of these vehicle types starting after 2022.

Until then, the cab-integrated segment is projected to gain high popularity. Manufacturers such as Komatsu, Scania, Volvo Trucks and Case IH are among those who have introduced cabless autonomous vehicle concepts.

Based on vehicle class, the automated truck market has been divided into Class 8, Class 9 and ultra class. Classes 8 and 9 are a highly promising segment, owing to their widespread utilization in the logistics industry. The logistics industry is anticipated to propel the Classes 8 and 9 segment of the automated truck market during the forecast period.

Ultra-class trucks are only used in the mining industry to carry large amounts of materials such as coal, ore, and overburden from pits. Mining has a lower volume of demand than the logistics/general trucking industry, so demand for ultra-class trucks will be lower in comparison to Classes 8 and 9.

The logistics segment is anticipated to expand at a rapid pace, and is likely to generate higher revenue than the mining segment, owing to the large consumer base for trucks in the logistics industry as compared to the mining industry.

In the report the automated truck market has been segregated into vehicles with one of three levels of automation:

The level 3 segment is projected to expand at a rapid pace during the forecast period due to the rising popularity of truck platooning across the logistics industry.

Asia Pacific has dominated the automated truck market due to the presence of Australia in the region, which has significantly large and highly advanced mines in the world. In 2018, the country adopted a large number of automated haul trucks.

Furthermore, the demand for automated trucks in the logistics industry is likely to rise in countries such as Japan, Singapore, and China, because of the presence of large logistics and transport industries in these countries. The decline in the young and working population in Japan is anticipated to rapidly boost the adoption of automated trucks in the country in the near future, as well.