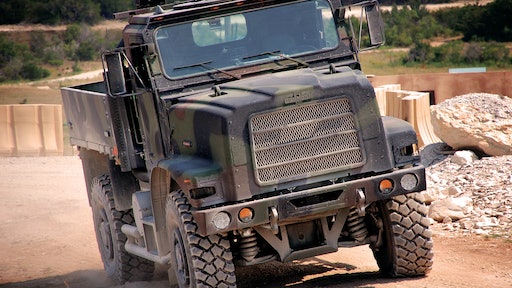 Unmanned tactical wheeled vehicles that have the potential to serve as a force multiplier and reduce Warfighters’ exposure to lethal attacks continue to come closer to reality. The U.S. Marine Corps Warfighting Lab (MCWL) and Oshkosh Defense, a division of Oshkosh Corporation, recently conducted the Marines’ first-ever training of multiple unmanned ground vehicles (UGV) in a single convoy using the Oshkosh TerraMax UGV technology. The Marines then evaluated the UGVs to determine how they can be utilized to support real-world “dull, dirty and dangerous” missions.

These most recent developments are a continuation of the MCWL’s Cargo UGV initiative, which uses Oshkosh Medium Tactical Vehicle Replacements (MTVR) equipped with the TerraMax UGV technology, and took place during the MCWL’s Enhanced MAGTF Operations (EMO) Limited Objective Experiment (LOE) 2.2, July 24 through August 5 at Fort Pickett, VA. The EMO LOE 2.2 sought to evaluate technologies and capabilities being developed for future missions.

“Seven Marines were trained on our UGVs’ operations in only three days at the EMO LOE 2.2,” says John Beck, chief unmanned systems engineer for Oshkosh Corporation. “That’s a testament to the TerraMax technology’s ease of control and user-friendly design. The capabilities of our highly sophisticated UGV systems require minimal user intervention to complete their missions – opening the door for future logistics operations to be conducted with fewer Warfighters, reducing cost and saving lives.”

Combat-veteran Marines were trained on the Oshkosh UGV technology for the first time in August 2011 and also assessed it in a series of tests in challenging terrain and environments. Following that successful evaluation, Oshkosh delivered a second TerraMax-equipped MTVR earlier this year, and in June the government evaluated two Oshkosh UGVs operating in concert with a manned command-and-control vehicle. Several key tasks were accomplished, including:

The Oshkosh TerraMax UGV technology is designed as a scalable kit. It can be integrated on new-production vehicles, including those built by other manufacturers, or retrofitted on existing vehicle fleets. Vehicles using the TerraMax technology can retain original payload and performance capabilities, and they can run planned missions in full autonomous mode or by “shadowing” a leader vehicle.

The TerraMax technology can function in the same weather conditions and operating environments as manned vehicles, requiring minimal human interaction and operator training. Oshkosh is teamed with the National Robotics Engineering Center of Carnegie Mellon University for perception system and autonomy software development.

The Cargo UGV project is sponsored by MCWL and the Joint Ground Robotics Enterprise Robotics Technology Consortium. Oshkosh received a contract for the Cargo UGV initiative in June 2010.

Oshkosh executives will be on hand to discuss the Cargo UGV initiative and the TerraMax technology at booth #4232 at AUVSI’s Unmanned Systems North America 2012.