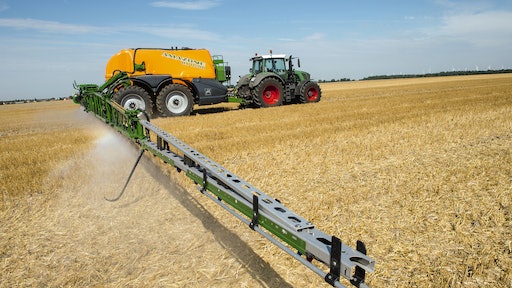 The next-generation VarioGuide guidance system with two new receivers, offers absolutely reliable guidance independent of local circumstances. For the start, the further development will be for the PowerPlus and ProfiPlus variants which will be available for the Fendt 800 Vario, 900 Vario and 1000 Vario tractor ranges starting in 2016. AGCO/Fendt has also expanded its Variotronic operating concept with new functions. These include “Variable Rate Control.”

It is impossible to imagine modern farming enterprises without guidance systems since they have become standard. The VarioGuide automatic guidance system facilitates work with the tractor, day and night and over a long period of time, so operators can concentrate fully on the implement. Accurate driving is no problem, even in poor visibility conditions; operating inputs and working time is saved since there is less overlapping.

With the convenient automatic new VarioGuide, AGCO/Fendt offers customers even more functionality and dependability: A reliable supply of correction signals enables failure-free functioning of the guidance system under difficult reception conditions or when there are obstructions.

The right receiver for the operation: NovAtel and Trimble receiver

In the new generation VarioGuide, users remain in their familiar and well-known VarioGuide environment. The receivers are controlled with the Varioterminal as usual; operation is identical for both receivers. However, operators can now select between two receivers.

The less expensive NovAtel receiver is the entry-level version with EGNOS/WAAS accuracy. An upgrade to RTK (radio & NTRIP) is possible. The "fill-in time" when there is an RTK outage is up to 60 seconds with the NovAtel receiver.

The Trimble receiver is equipped with an expanded scope of functions. The entry-level version, like the NovAtel receiver, also offers the correction services EGNOS/WAAS and additionally RangePoint RTX. The RangePoint RTX license is free of charge in the first year of use. The Trimble receiver can also be equipped with RTK accuracy and offers additional correction services such as Center Point RTX, Center Point RTX FAST or RTK correction via radio transmission or NTRIP mobile network. An additional advantage of the Trimble receiver is that it uses Trimble xFill technology for a considerably longer "fill-in time" of up to 20 minutes in the event of RTK outages.

In practice, the advantage of open systems lies at hand. Customers can select individual GNSS receiver solutions, which are optimally tailored to their requirements. They can use already existing RTK infrastructures and have absolutely reliable guidance – tailored to meet their exact operating requirements.

The PowerPlus variant is now available for the tractors in the Fendt 800 Vario, 900 Vario and 1000 Vario series. It offers preparation for guidance with a 7-inch terminal. For this version, the NovAtel and Trimble receivers are available with all accuracy levels.

VRC is a new, additional feature, which can be retrofitted on all ProfiPlus tractors (Fendt 500 Vario to Fendt 1000 Vario series) with VarioGuide Standard or higher, starting with the Agritechnica 2015. The retrofit or activation is similar to SectionControl or VariotronicTI auto. Mandatory for Variable Rate Control is the proprietary Fendt VarioDoc Pro documentation system as well as an ISOBUS-capable implement with “TC-GEO” standard.

To be able to use Variable Rate Control, an application map based on yield maps must be created for a specific area using field management software. A job is created in ISO-XML format with the aid of the field management software. The application map is saved in addition to the job details (e.g. area name, farm, etc.). The job is transferred to the Varioterminal in the tractor either per mobile network or Bluetooth.

Accurate after only one track: Fendt SectionControl Assistant

Due to the distance between the GNSS receiver and application implement, it is necessary to optimise the switch-on and off time points manually when using automatic section control, e.g. when sowing maize or sugar beets. First the implement manufacturer transfers a standard setting, specified in seconds, to the tractor terminal.

To prevent unnecessary waste of operating inputs and to exploit the full potential of the automatic section control, Fendt has developed the SectionControl Assistant to ensure correct and easy setting of this correction value.

For example, if the operator determines that the Fendt SectionControl switches off the sections too early on the first track, resulting in an untreated gap, he enters the information that it was switched off too early into the menu using the icons. In the following dialog, the operator enters the size of the gap that has been created as well as his ground speed. The switch-off time of the implement is now automatically adjusted for all sections. The operator already receives an optimal result on the second track. The data can be saved and called up again for later operations.

For farmers, the advantages of the Fendt SectionControl Assistant lie in the precise work results, easy and intuitive handling, but, most of all, in the reduction of the operating inputs used, the optimal application of PSM, fertiliser, seeds, etc. and ultimately also in maximum protection of the environment and resources.

A look into the near future: VarioGuide contour segments and wayline converter

Up to now, when using an automatic steering system, all waylines in a field had to be created, named and saved separately. When working, each of these waylines had to be called up manually multiple times. For example, when planting maize, 25 individual time-consuming actions were required on the terminal up to now. The new feature, VarioGuide ContourSegments, makes recording and selecting the waylines much easier and more convenient. In the future, all relevant waylines will be calculated together as one clear unit and there will only be a maximum of eight individual actions required. Paths can be created very quickly and easily, in particular for very complex field geometries. Changing between the waylines, e.g. lengthwise track to the headland, is done automatically.

The difficulty for customers up to now was that all manufacturers of GNSS-based steering systems today use different formats for exchanging geodata. As a result, waylines and field boundaries are not compatible between different manufacturers. However, due to new requirements, such as for strip till or controlled traffic, the significance of this data exchange is growing.

AGCO/Fendt will be relying on a web-based wayline converter, which can process existing, manufacturer-independent data formats.

Through the use of manufacturer-independent waylines, farmers and contractors can profit from a considerable reduction in working effort and operating input costs.

The wayline converter is expected to be available to customers at the end of 2016.