Caterpillar provides a preview of some of its latest products which will be on display at World of Concrete 2012. 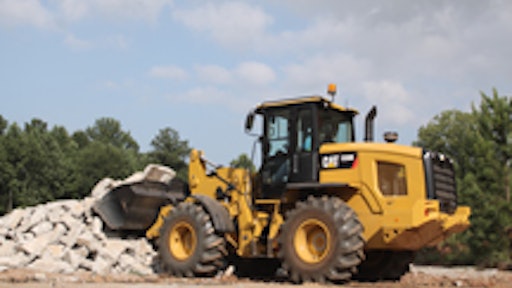 The Caterpillar display at World of Concrete 2012 will encompass 5,000 square feet of prominent floor space in the Central Hall (C5371) and feature a range of new earthmoving and lifting machines making their first public appearance, along with a variety of new work tools and the exclusive new Cat CT660 Vocational Truck in dump- and mixer-body configurations.

The new Cat K Series Small Wheel Loaders (924K, 930K and 938K) are redesigned to deliver class-leading comfort, performance and fuel efficiency. The new loaders use the Cat C6.6 ACERT engine, which meets Tier 4 Interim emission standards and can deliver fuel savings of up to 30%, compared with H Series models. The new loader linkage blends the power of Z-bar linkage with the versatility of Cat VersaLink or IT linkages for superior performance with buckets or forks. Featuring a new Intelligent Hydrostatic drive system, K Series models are equipped with a front-axle differential lock, new cooling package, and new operator's station with automatic climate control.

The new Cat D Series Skid Steer Loaders (272D and 272D XHP) and Compact Track Loaders (299D and 299D XHP) are large-frame models built to take on the toughest digging applications and handle the largest work tools—such as cold planers and wheel saws. The new D Series models use a more powerful, Cat C3.8 engine that meets Tier 4 Interim emission standards and feature a 19% boost in lifting force. The XHP models are the largest and most powerful models of their type ever produced by Caterpillar, having an auxiliary-hydraulic flow of 40 gpm (150 lpm) that produces 22% more hydraulic horsepower, compared with C Series models.

The Cat TL1255C Telehandler, the largest machine in the new C Series range, has a maximum lift capacity of 12,000 lbs. (5 443 kg) and a maximum lift height of 54.3 ft. (16.6 m). The TL1255's Cat C4.4 ACERT engine, meets Tier 4 Interim emissions standards while developing 142 hp (106 kW). It is specially designed for telehandler applications and can accommodate B20 biofuel. The TL1255, with a top speed of 20.4 mph (32.8 kmh), features a simultaneously extending boom, new Cat 4F/3R powershift transmission with clutch modulation, and new styling and color scheme.