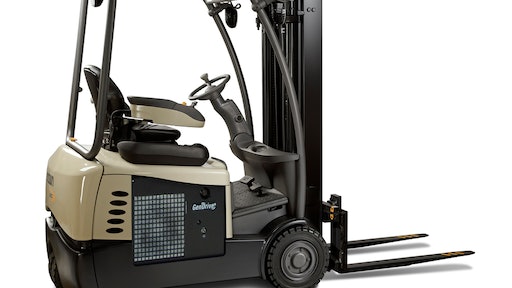 Known as the multipurpose workhorse for warehouse applications, the Crown SC 5300 Series has met approval within the company’s Fuel Cell Qualification Program that analyzes Crown electric forklifts for use with fuel cell packs. It is a member of Crown’s line of sit-down counterbalanced forklifts, which are equipped to handle multiple applications from dock work to transporting and stocking. The truck designed for fuel cells maintains similar features and benefits presented by the standard SC 5300 model. More than 20 of the company’s forklift models have been qualified for use with fuel cells.

“With numerous companies in the United States successfully integrating fuel cell-powered forklifts into their fleets and facilities, we are beginning to receive an increasing number of inquiries and interest on the technology from many of our European customers,” says Ernst Baumgartner, fuel cell project manager, Crown Equipment. “The fuel cell-powered Crown SC 5300 is a major accomplishment toward making fuel cells a viable strategic option for European customers looking to bolster the sustainability of their warehouses.”

Baumgartner is a member of the International Electrotechnical Commission’s (IEC) Technical Committee (TC) 105, Working Group 6, which has been charged with preparing international standards regarding fuel cell technologies for electric forklift fuel cell applications. The primary focus of the standards is on performance and safety criteria, as well as interchangeability of components and parts.

Air Liquide, the leader in gases for industry, health and the environment, became the first customer to install the Crown trucks in the European market and the first operation in France to use fuel cell-powered forklifts.

“Air Liquide applauds Crown’s continuing initiative to facilitate the use of fuel cells with their forklifts. It presents a promising business potential among Crown, HyPulsion – the newly created joint venture between Axane (an Air Liquide subsidiary) and Plug Power – and Air Liquide Hydrogen Energy,” says Pierre Etienne Franc, director of technologies of the future, Air Liquide. “We are fully satisfied with this first hydrogen forklift operational deployment at the Air Liquide European Logistic Center in Vatry, France. It demonstrates our commitment to promote hydrogen energy solutions for logistic operators, a new clean and productive energy solution for captive fleets.”