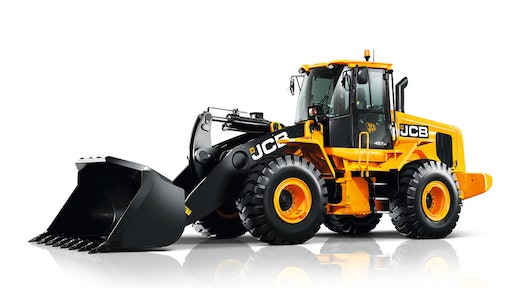 JCB is building on its long pedigree of manufacturing wheel loaders with the introduction of a brand new flagship machine which offers more power, torque and productivity.

The company – which has been making wheel loaders for 44 years – introduced the new JCB 457 at INTERMAT 2012 to replace the existing 456. At the heart of the machine is a Stage IIIB (Tier 4 Interim) compliant 8.9 liter Cummins engine – the biggest engine used in JCB’s construction equipment range.

The engine incorporates the following technology:

A new Economy mode, to reduce engine output for lighter duties, means the 457 can deliver fuel savings of up to 6%. It also has a low idle feature and an engine shutdown mode, which kicks in after a pre-determined idle period to save fuel.

The lock-up torque converter on the five-speed transmission activates in gears 2 to 5, reducing losses from the transmission and increasing productivity and means customers will really notice the difference on hill climbing, roading and load and carrying performance.

An intelligent clutch cut-off system also comes as standard, for both the four-speed and five-speed transmissions, making it ideal for truck loading or tight corner maneuvers. The system dynamically adjusts the clutch cut-off point depending on transmission output torque and brake pressure. It effectively disengages the clutch to limit tractive effort, and also reduces brake wear within the new ZF axles.

When the operator presses the brake pedal, maximum power is provided to the load sensing hydraulic system, while reducing power to the driveline. This provides much greater control at higher engine rpm and lower travel speeds, boosting productivity when digging and loading.

This automatic option locks the differential when required - without the operator needing to activate the system, providing increased traction and less slippage, not only reducing wheel spin and tyre wear, but improving fuel consumption and boosting productivity.

The JCB 457 also offers more loading capability, weighing 310 kilos more than the 456. The tipping load is increased by 3.3%, which means that an extra quarter of a tonne can be carried in the bucket.

In terms of styling and design, the distinctive large cab is home to a much-improved interior. A new full-color LCD monitor and a revised instrument cluster, providing the operator with a clear view of important machine functions. The menu system is intuitive and provides the operator with real time fuel consumption and cycle data.

New rear styling with a revised counterweight design gives the 457 a more modern and aggressive look and the sloping engine canopy at the rear, has been designed to also improve all-round visibility.

JCB Chief Innovation and Growth Officer Tim Burnhope says: “This restyling certainly differentiates the 457 from the previous generation of JCB wheeled loaders and sets a new design direction. The JCB 457 is a bigger, better and, frankly, unbeatable new wheeled loader from JCB.”