The DEUTZ-FAHR Agroplus F Ecoline tractors include an efficient mechanical transmission with the option to add an underdrive gear for additional speeds. 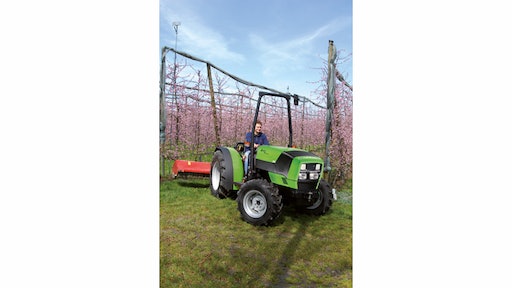 The Agroplus F Ecoline Series from DEUTZ-FAHR embodies the essence of simplicity, with a single piece cowl, SDF TIER III engines, a low driver seat, short wheel base and outstanding agility and maneuverability. These are simple but extraordinarily practical and functional tractors capable of working with any implement. Ideal for the small to medium farm, these tractors strike the perfect balance between superior performance and low running costs.

Agroplus F Ecoline tractors are equipped with three and four cylinder SDF Series 1000 TIER III engines with simple turbo or turbo-intercooler forced induction and an electronic governor system.
Incredibly tough and reliable, these engines are specifically built to keep on working uninterruptedly for hours on end with low running costs and extremely limited maintenance for minimized loss of productivity.
The modern high pressure injection system uses a single pump for each cylinder. This is a far more advanced solution than the rotary or in-line pumps used in conventional injection systems, and ensures superlative performance with extraordinary reliability.
Euro III A engines are equipped with HRT (Hydraulic Roller Tappets) technology, a system controlled by an electrohydraulic valve to optimize the injection of fuel into the combustion chamber. During engine starts while the engine oil is still cold, the system increases valve lift slightly to advance the injection timing, optimizing engine efficiency right from the start of the day and in any weather conditions, and eliminating the unpleasant white exhaust smoke typically produced by engines under cold starting conditions.
The fuel injection system is controlled electronically by the engine management ECU, which continuously monitors engine load and optimized engine function accordingly.
The driver can also set and store engine speeds for specific operations. Whenever an application calls for a constant engine speed, the governor automatically maintains the preset engine speed value. This increases productivity and also makes headland turns quicker and easier.
Agroplus F Ecoline also features internal exhaust gas recirculation (EGR), with recirculation taking place directly in the combustion chamber.
During the intake cycle, a dedicated cam lobe keeps the exhaust valve partially open. This mixes a small proportion of exhaust gas and returns it to the cylinder, where a second combustion process eliminates any unburnt hydrocarbon particulate, keeping exhaust emissions as low as possible.

A modular, smooth transmission, for greater efficiency and fuel economy

Agroplus F Ecoline Series tractors are equipped with an extremely efficient mechanical transmission with the ideal number of intelligently spaced ratios, with a five-speed for a top speed of 40 km/h, and a synchronized reverse shuttle for significantly less time-consuming transport and transfer jobs.
As an option, the transmission may be equipped with a mechanical underdrive gear (with control incorporated in reverse shuttle lever) for an impressive total of 30 speeds, which may be increased even further to 45 speeds with the addition of a supercreeper gear.
The transmission lever is situated on the right-hand side of the driver seat in all models in the series; while the synchronized reverse shuttle control lever is next to the transmission lever, for immediate direction inversions.

Dependable power in all terrain conditions

The rear PTO is offered with 540/540ECO/1000 rpm speed modes.
The optional synchronized PTO is ideal for transport applications on steep gradients and is extremely useful for operating driven axle trailers.
The rear PTO is mechanically and simply engaged from a lever on the left-hand side of the driver seat. The lever control lets the driver engage drive gradually to protect the components of the PTO system.

Outstanding manoeuvrability even in the most extreme conditions

With a hydraulic steering system fed by a gear pump for effortless, smooth and responsive steering action, these tractors are astonishingly nimble even in the most challenging conditions.
Four or six way distributors are offered, while a flow regulator makes it possible to use more than one auxiliary distributor simultaneously.
The flow regulator dial linked to the second auxiliary distributor ensures the ideal delivery rate for all applications.
The rear lift, with an impressive capacity of 3,000 kg, is equipped with a simple but extremely effective mechanical draft sensing system on the three-point linkage: the movement of the three-point linkage bracket is controlled by a hitching valve via an oscillating bar and an actuator arm.

The dual traction front axle is driven by a central transmission shaft, eliminating the need for universal joints and cutting maintenance to an absolute minimum.
With a steering angle of 55 degrees, these tractors can turn with ease in even the tightest spaces, while the steering cylinders are installed in a protected position behind the axle to prevent the risk of damage.
For maximum traction and a significant increase in productivity, the differentials are 100% lockable. The rear differential lock is engaged mechanically by the operator from a pedal on the tractor platform, and remains engaged until the brake pedal is pressed, while the differential lock on the front axle is engaged simultaneously with the rear differential.
Last but not least, the Agroplus F Ecoline features an integral braking system with wet discs on all four wheels.
Ecoline models are conceived and built for specific applications where the dimensions of the tractor are crucial.
A wide choice of smaller tyre/wheel combinations and a specific front axle are also available to significantly increase choice in terms of tyre and track and offer a tighter turning circle, for working between narrow rows. With 240/70R18 front tires and 380/70R24 rear tires, the overall width of the tractor is just 1,441 mm.

Conceived according to the latest standards for space usage and ergonomics, the driver area of Agroplus F Ecoline tractors is roomy and comfortable.
Suspended pedals and an adjustable steering wheel ensure the ideal driving position, while special deflectors in clear polycarbonate protect the driver against soil and mud debris and ensure an unobstructed view of the front wheels.