Scania has started production of city buses in Narasapura, India which will be delivered to customers in the region, as well as exported to other regional markets. 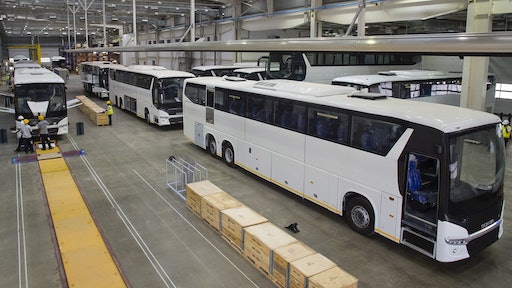 Scania has inaugurated its city bus production in Narasapura in the Indian state of Karnataka in the presence of the Swedish and Indian transport ministers. Scania has so far invested about SEK 400 million (EUR 40 m.) in Narasapura, where the company has also been assembling trucks since 2013.

“The inauguration of this bus production facility is an important milestone for our Indian operations. The buses and coaches produced here will also be exported to other regional markets in the future and even to the rest of the world in the longer term,” says Scania’s President and CEO Martin Lundstedt.

Scania’s industrial operations in Narasapura, 40 km east of Bangalore, already include final assembly of truck and bus chassis as well as bodybuilding and fitting out of complete vehicles. The production of fully-built long-distance coaches is already running. The city bus production will begin shortly, and the first deliveries are planned by year-end. The head office of Scania’s Indian subsidiary is also located in Narasapura, as well as a service workshop and a central parts warehouse.

The production facility is currently designed for 2,500 trucks and 1,000 buses per year and has 600 employees. Within the next five years, Scania expects to double capacity and to recruit a further 200 employees by the end of 2017.

In India, demand is increasing for vehicles with Scania’s quality and performance, as well as service-related products, in line with the country’s rapid economic growth and initiatives to improve efficiency in the transport sector. The Indian Government’s various initiatives to improve the environment and transport systems in the cities are also creating great opportunities for Scania’s sustainable solutions.

“Already today – here and now – we can deliver trucks and buses that can run on biofuels, which are increasingly being produced, for example by using waste from the cities. Scania can also contribute with competencies and experience relating to biofuel production and efficient public transport systems,” says Anders Grundströmer, Managing Director, Scania India and Senior Vice President, Scania Group.

Scania has been present on the Indian market since 2007, when cooperation was initiated with Larsen & Toubro (L&T). L&T has successfully established Scania’s trucks and services and has developed a close partnership with customers in the mining industry.

During 2011, Scania formed the company Scania Commercial Vehicles India with the aim of boosting its presence through sales to additional segments of the Indian commercial vehicles market. The establishment of the operations in Narasapura began more than two years ago.

This technology keeps the air clean during the cutting of hydraulic hose assemblies and protects the operators from fine particles.
UNIFLEX
May 31st, 2022

Learn more about the groundbreaking electrification technology solution from John Deere and Joskin that sets a new agriculture industry standard.
May 24th, 2022

This epoxy has a convenient-to-use 1-to-1 mix ratio by weight and cures at room temperature, or more rapidly with heat.
Master Bond Inc.
May 24th, 2022

The Class 5 vehicle debuts the EAVX body design powered by REE’s modular P7 platform and is the first fully drive-by-wire walk-in van on the market.
REE Automotive
May 17th, 2022

As manufacturers pivot to meet emissions requirements, they must decide which mix of alternative power sources to use.
Lori Ditoro
Apr 26th, 2022

Manufacturers must reduce their dependence on diesel fuel and move to lower emission technologies while continuing to supply the performance customers expect.
Apr 5th, 2022

Bell Trucks America has signed Pronto AI as their provider of autonomous technology for articulated dump trucks in the U.S.
Mar 22nd, 2022

The first production Zeus Class 5 electric work trucks are being built to spec for and put to the test by the Sacramento Municipal Utility District.
Becky Schultz
Mar 21st, 2022

While the global economy remains firmly on track to expand in 2022, a number of challenges are poised to serve as obstacles for the agriculture and construction equipment industries.
Association of Equipment Manufacturers (AEM)
Mar 7th, 2022
Follow Us