The U.S. Army has placed an order with Oshkosh Defense for 657 JLTVs, installed kits and related support. 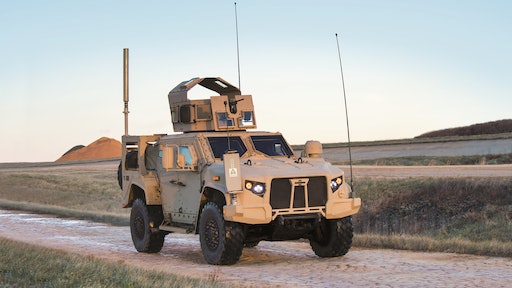 Oshkosh Defense LLC, an Oshkosh Corporation company, announces that the U.S. Army has placed an order for the Joint Light Tactical Vehicle (JLTV) program including 657 vehicles, 2,977 installed kits and related support. The order, which will serve both the U.S. Army and Marine Corps, is valued at more than $243 million.

“The JLTV program is providing our Soldiers and Marines with the world’s most capable light tactical vehicle,” says Wilson R. Jones, Oshkosh Corporation President and Chief Executive Officer. “The Oshkosh JLTV will be the platform our troops depend on to keep them safe as they perform future military operations outside-the-wire.”

The JLTV program remains a top priority for the Department of Defense, filling a critical capability gap for the U.S. Army and Marine Corps by replacing a large portion of the legacy uparmored HMMWV fleet with a modern light protected vehicle. The JLTV provides unprecedented protection and off-road mobility, as well as transportability via air, land and sea. The JLTV production contract calls for Oshkosh to deliver a total of nearly 17,000 vehicles, as well as kits and services over an 8-year period with first vehicle delivery in October 2016. The vehicles, trailers and installed kits for this order will be delivered by first quarter FY18.

The Oshkosh JLTV delivers the latest in automotive technologies, the Oshkosh Core1080 crew protection system, and the Oshkosh TAK-4i intelligent independent suspension system to provide the ultimate combination of protection and mobility. The JLTV Family of Vehicles is comprised of two variants, a two seat and a four seat variant, as well as a companion trailer (JLTV-T). The two seat variant has one base vehicle platform, the Utility (JLTV-UTL). The four seat variant has two base vehicle platforms, the General Purpose (JLTV-GP) and the Close Combat Weapons Carrier (JLTV-CCWC). The Oshkosh JLTV is scalable and adaptable to future missions and unknown threats for decades to come.

U.S. Soldiers and Marines can expect: